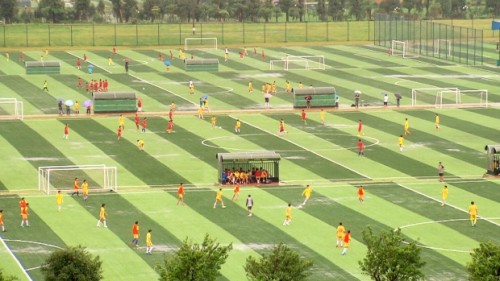 The Chinese sports industry will surpass three trillion yuan (US$460 billion) by the end of 2020, according to the nation's newly released five-year sports development plan.

Key elements of the plan focus on football, with the aim to have 50 million regular football players backed by 70,000 football pitches across the country - averaging one pitch for each 20,000 people.

As previously announced, China also plans to have 20,000 foobtall academies by 2020.

The plan draws out blueprint for nationwide fitness programs, setting goals of newly building 500 public fitness centres in counties and 15,000 fitness facilities in villages and towns.

In addition, 10,000 more multi-functional playing grounds will be constructed in cities, averaging 1.8 metre² of recreational space per person by 2020.

Against a backdrop of this massive growth in sport, China is facing an obesity crisis with, as of 2014, about one in six boys and one in 11 girls being definded as obese.