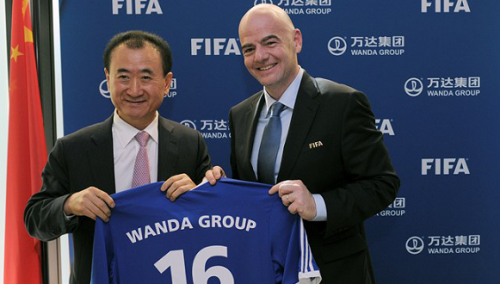 Marking another step in the increasing involvement in world football by Chinese commercial interests, the new partnership was announced in the presence of FIFA President Gianni Infantino and Wanda Group’s Chairman Wang Jianlin at a ceremony in the Swiss city of Zurich.

Becoming the first Chinese company to sign up as a FIFA partner, the Wanda Group will become a top level sponsor of the next four FIFA World Cup tournaments and having the rights to launch a range of promotional campaigns until 2030 as part of the agreements.

Speaking about the deal, the newly elected Infantino stated “we are pleased to welcome the Wanda Group to FIFA ... a company that has a long affiliation with football, has been an active supporter of the game for many years and shares our enthusiasm to develop and strengthen football.

“As FIFA President, I am committed to providing stronger support for football development to our member associations, and I believe that the relationship with Wanda will support us to continue the on-going development and growth of the game in China and all over the world.”

Wang, believed to be of China's richest men, added “we are highly motivated to promote football across the country and to inspire a new generation of youngsters.

“The Chinese Government is committed to this development and as a company we strongly support these efforts. In order to professionally grow the existing grassroots movement into a sustainable and well managed sport, we are delighted to tap into the vast experience of the most competent advisor – FIFA.

“We believe in football as one of the most attractive sports globally and have the highest trust in FIFA and its newly established organisational structure.” 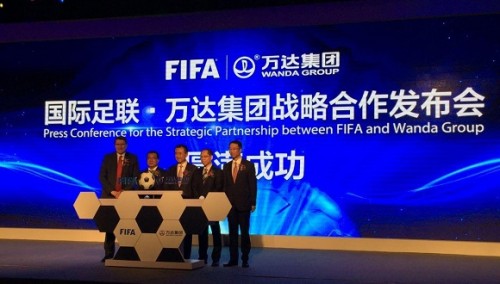 Wang also went on to predict that, in addition to his company, two more Chinese companies are likely to sign as global sponsors with FIFA in the near future.

He stated “in a short time, there will probably be another company that will sign up as a partner, and if everything goes smoothly there could be three Chinese companies, including Wanda, as top-level FIFA sponsors this year.”

He also explained the reason for Wanda partnering with FIFA, advising "the Chinese football industry is now in an unprecedented spring" and it is "very worthy" to be teaming up with FIFA.

In other news relating to the growth of football in China, the City Football Group, the holding company that owns Manchester City, Melbourne City and New York City FC, is planning to set up a franchise in the booming Chinese Super League as the next step in their global expansion.

ESPN FC reported that the Group aims to have a network involving one team with the title 'City' on each continent, creating unique commercial opportunities while greatly strengthening their flagship English Premier League club's identity. China is naturally viewed as the next destination.