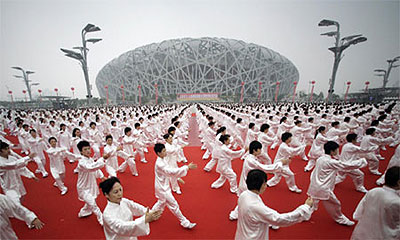 China celebrated its National Fitness Day last Thursday (8th August), marking the fifth anniversary of the start of the 2008 Olympic Games in Beijing.

The day is designed to remind the nation of the need to take more exercise to stay healthy, and, this year, followed the release of a national survey by the General Administration of Sport which shows a decline in physical activity among Chinese adults between the ages of 20 and 69.

The same age group is also the least active, with 51% saying said they did not do any regular exercise, despite an overall 4.5% increase in the total number of people doing regular exercise.

Work pressures on young adults are believed to be the main cause of the declining levels of exercise among young adults with the China Daily reporting that a survey of more than 30,000 young white-collar adults and found that they work 8.66 hours on average everyday, with 70% of them having to work extra hours at home.

The China Daily also suggested that students are also often too busy to exercise due to curriculum overload, reporting on the death of a 20-year-old male student at the South China University of Technology in May of this year who died after running 1,000 metre in a physical test with prior lack of exercises was said to have contributed to the tragedy.

The General Administration of Sport is editing the national standards on exercise so that they will cover all groups aged from ages six to 69. These will vary according to age, but they will pay special attention to the young people's fitness and will take new measures to improve their physical condition.