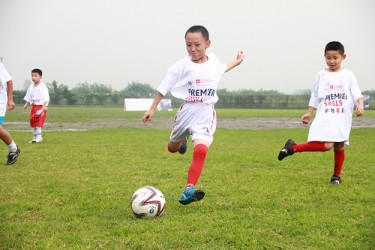 China is aiming to fast track its talent development pathway for football with the Chinese Ministry of Education revealing plans for 20,000 primary or middle schools specialising in football as of next year.

Having last year announced plans to teach mandatory football courses at 50,000 specialist football schools by 2025, the Ministry of Education (MOE) will also choose 30 trial areas for school football, saying that the move is aimed to improve the popularity of football in Chinese schools, and lay the foundation for more talented football players.

10% of those schools will be senior schools, 30% will be junior schools and 60% will be primary schools, with vocational schools to also be considered.

The MOE said schools with football as specialties will enjoy policy support in teaching, training, competitions, enrolment, funds and facilities. The performance of those schools and counties will also be used to evaluate the performance of local government in education.

The MOE said the move will also promote the construction of physical education courses and facilities, and ensure that students have at least one hour for sports in schools.

The move came in response to a series of on-field failures by China's national football team in recent years, with China not having qualified for the FIFA World Cup since 2002 and struggling in its attempts to reach the next World Cup in Russia in 2018.

However, China performed well at the 2015 AFC Asian Cup in Australia, beating Saudi Arabia and Uzbekistan in Group B to reach the quarterfinals of the competition.