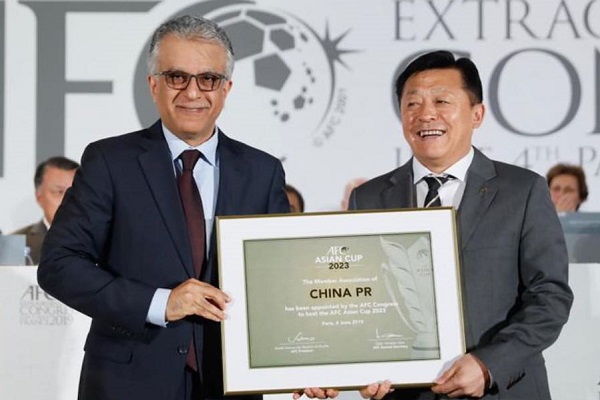 China has been awarded hosting rights to the 2023 AFC Asian Cup, with the national team football tournament to be staged in new stadia in the country.

China was the only remaining bidder for the tournament after the Korean Football Association withdrew its proposal last month. That came after Thailand and Indonesia had previously exited the race.

Its bid to host the quadrennial tournament included plans to build new stadia in seven of the 12 planned host cities while also including one back-up existing stadium in each host city. Each of the back-up options meet the latest international competition requirements set by the Asian Football Confederation (AFC).

The final of the tournament will be held at Shanghai Pudong Football Stadium, which is currently under construction. The stadium will also host a semi-final along with Beijing’s National Stadium.

Announcing China’s hosting, AFC President Sheikh Salman bin Ebrahim Al Khalifa, stated “this is an important moment for football in Asia and beyond. Football now has a chance to unlock the potential that exists in the world’s most populous country.

“We have seen the rise of the game under the direction and investment of the Chinese government. Now we have the chance, with this Asian Cup, to develop a true legacy for the global game. Hosting the AFC Asian Cup will provide China PR with great facilities and infrastructure to stage football tournaments.”

China hosted the Asian Cup for the first and only time back in 2004, when the event was a 16-team tournament. The event is now contested by 24 teams and this year’s tournament in the United Arab Emirates was won by Qatar.