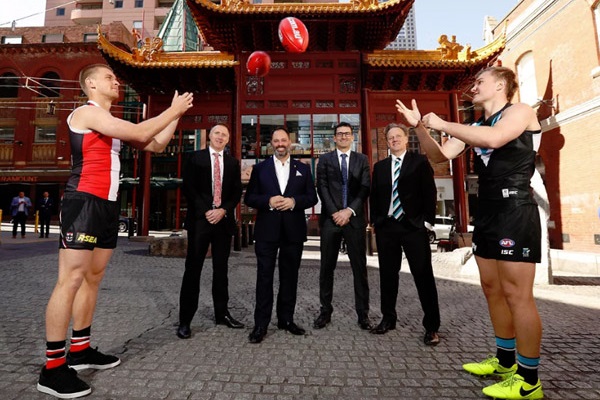 While crowd numbers were down for the AFL’s annual fixture in Shanghai compared to previous year’s, the AFL is set to open an office in China as part of its ongoing plans to have a presence in the expanding Chinese sports market.

Staged on Sunday at Shangai’s Jiangwan Stadium, the AFL round 11 clash between St Kilda and Port Adelaide was notable for swathes of empty seats.

While AFL sources claimed in advance of the fixture that the 25,000 capacity venue was a ‘sell-out’, a crowd of 9,412 was reportedly in attendance for Port’s win, down from 10,689 and 10,118 for the two Power v Gold Coast Suns matches in previous years.

Set to open in the coming weeks, the AFL's new Chinese office will be staffed by two full-time employees.

"They'll also be driving strong broadcast partnerships. We have a game a week on TV there and some strong social media coverage.

"Thirdly, the government plays such an important role, so it shows the government that we are long-term committed to China and building those partnerships."

The AFL wants to be involved with China because of a desire to expand, and with 1.2 million people of Chinese descent living in Australia, the link is already there.

It also looms as a revenue source to help fund other areas, such as the NAB AFL Women's and grassroots competitions.

The game has also launched a Chinese-focused Auskick centre in Sydney suburb of Hurstville where it hopes that more than 50 people of Chinese descent will attend.

Introducing the centre, Stevenson advised “they'll learn about Auskick and AFL in Mandarin, in Chinese writing. It's a great opportunity for us to grow that China strategy more deeply with the Chinese community in Australia.
The AFL sees that a top-line Chinese player would help the game take off in China, whether in the men's or women's competition.

Stevenson stated “we certainly think that saying 'You can't be what you can't see' is very important.”

How that happens could come in a similar path to American Mason Cox, who was a college basketballer before becoming a key cog in Collingwood's forward line.

Stevenson added “there's tens of thousands of elite basketball players in China and we would love to expose them, and ideally one day, have a Chinese elite player playing our game.”

Critics argue the AFL should put money into other areas, such as having a team in Tasmania, rather than directing that money towards China.

Stevenson concluded "I wouldn’t buy into whether it's more appropriate to spend money either here or there, but what I do know is there's a significant growing people with Chinese descent living in Australia. It's over 1.2 million people.

"They're strong trade opportunities between the two countries and if we can drive some of that commercial revenue, it'll allow us to invest into some of those domestic markets and community football, then that seems like a win-win."