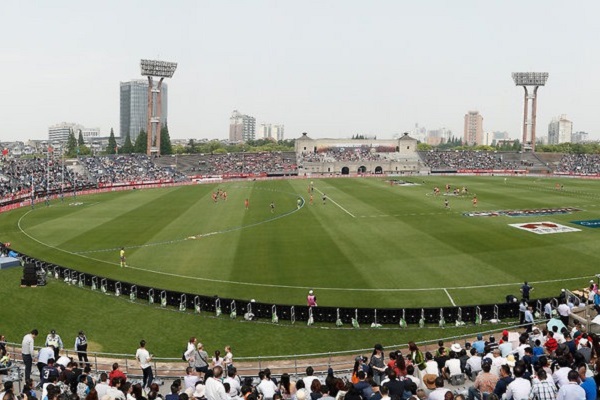 The AFL premiership season match in China, first played in 2017, will now form part of a broader promotion of Australia in China.

Federal Minister for Trade, Tourism and Investment, Simon Birmingham, today announced a three-year commitment to the AFL game in China, which in 2019 will form part of a new ‘Festival of Australia' promotion

A program of activity across 10 cities in China that will run from 20th May to 2nd June, the ‘Festival of Australia’ will highlight Australia’s premium food and wine, aged care, innovation, education, investment, culture, tourism and sport.

It will culminates in the AFL match between Port Adelaide and St Kilda at Shanghai's Jiangwan Stadium on 2nd June 2019.

Announcing the backing, Minister Birmingham stated “China and Australia have deep commercial and cultural ties, built over many years, but there is significant opportunity to grow exports of quality Australian products and services to the world’s biggest consumer market.

Minister Birmingham claimed "this is a new model of engagement between Australia and China, which transcends trade, tourism, investment as well as sport and culture, to promote Australia in China and enhance interactions between the peoples of both countries."

The AFL and Port Adelaide Football Club, which have a joint venture to organise the annual AFL match in China, welcome the decision.

Port Adelaide Chairman David Koch stated "today’s announcement is an incredible vote of confidence for what Port Adelaide is doing in China.

“When we first played an official game in China in 2017, people were pleasantly surprised at what had been achieved.

“Now, the annual match which is to a large extent the product of Port Adelaide’s vision and excellence is the anchor of a significant event for Australia in China.

“I encourage all businesses with a focus on China, and all footy supporters, to be there.

“With the announcement of this Festival of Australia, all roads lead to Shanghai; I can’t wait.”

AFL Chief Executive, Gillan McLachlan also welcomed the backing, stating "on behalf of the AFL, we thank the Government for their three-year commitment to support the Festival of Australia in China.

“This support will ensure our game becomes a marquee event in the Australia-China business calendar.

“Today’s announcement and the Government’s commitment certifies the momentum built on the first two Shanghai matches extends into the future both on and off the field in China.”