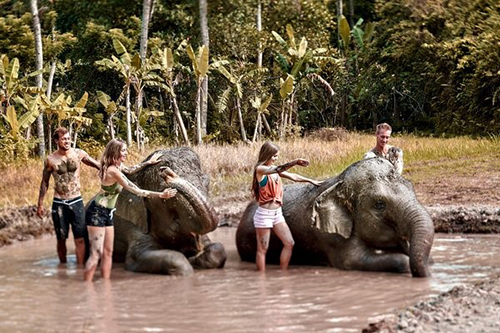 Bali Zoo’s new intimate Elephant Mud Fun half-day package allowing guests to “get down and dirty” with the friendly Sumatran elephants while discovering their behaviour from a mahout (person who works with, rides, and tends an elephant).

Bali Zoo's Elephant Mud Fun experience is designed to enlighten guests on elephant behavior. Guests will learn interesting facts such as elephants bask in mud during summer because their high body temperature generates a great deal of metabolic heat, and with no sweat glands to relieve their internal thermometers they rely on mud to stay cool.

Upon arriving, guests receive a brief introduction program from an English speaking mahout who shares information about the elephants and provides guests with tropical fruits for feeding. Guests are escorted by the mahout to the river bank to be introduced to free roaming elephants and to have a chance to interact closely and take photos with them. According to Lesmana Putra, General Manager of Bali Zoo, the adventure experience is very popular with Australian tourists.

Tourists then cover themselves in mud alongside the elephants and walk with the elephants to the nearby Wos River to join them for a splash. Once the elephants are clean, guests take some final photos with them before returning for a shower and change followed by a relaxing lunch.

Visitors are invited to explore the rest of the zoo to see the zoo's collection of over 500 rare and exotic animals including rare and endangered species such as the Komodo dragon, Sumatran Tiger, and Orangutan.