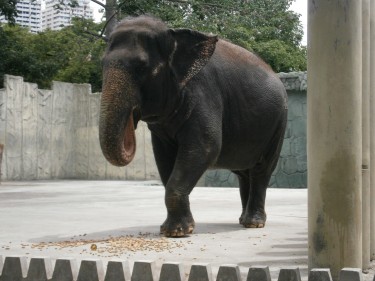 Although she has been Manila Zoo's star attraction for the over three decades, a global campaign to move Mali the elephant to a wildlife sanctuary is gaining momentum.

The only captive elephant in the Philippines, Mali has spent nearly all of her life in captivity since she was donated by the Sri Lankan Government 35 years ago at the age of three.

For some of that time Mali was housed in a small pen, although she now occupies a 1,000 metre2 open-air, concrete-floored enclosures that contain sand and water.

However, over the last year People for the Ethical Treatment of Animals (PETA) have been running a campaign to have her released from the zoo and sent to an elephant sanctuary in northern Thailand.

British pop star Morrissey, joined the cause in May with a letter to the Philippine President, Benigno S. Aquino III, that read "I ask that you send Mali to a sanctuary where she would have room to roam and be able to be among other members of her own species.

"Her life consists of extreme loneliness, boredom and isolation in an area that is a fraction of the size of her natural habitat."

Two months later, the writer J.M. Coetzee, who was awarded the 2003 Nobel Prize in Literature, weighed in, adding "35 years is a heavy sentence to bear, longer than is served by most murderers.

"Mali has paid the penalty for not being fortunate enough to be born human. Now is the time to release her."

However, Manila Zoo Chief Veterinarian Dr. Donald Manalastas dismisses the campaign, telling the International Herald Tribune "we have these celebrities saying things, but they haven't seen Mali. They have never been here.

"They don't know how we are taking care of her. They are just listening to PETA."

The Zoo opposes the transfer of Mali to a sanctuary because of her advanced age and fears that she would not survive the sedation and stress associated with transporting her to Thailand.

Dr. Manalastas is also uncertain as to whether she would be able to assimilate with other elephants once she arrived, adding "we have asked them, 'Can you assure us 100 percent that she will survive the trip?.

"I believe that she considers us her family. Mali feels safe with us."

However, PETA Asia senior campaigner Ashley Fruno disputes the assertion that Mali might die in transit, adding "we're spending a lot of our time dispelling myths about Mali's proposed transport. Because they don't have an elephant expert in the country, most people don't realize how routine it is to transport elephants."

In May, Dr. Mel Richardson, a California-based veterinarian with extensive experience caring for elephants, visited the Manila Zoo at the urging of PETA.

In his report, posted on the PETA website, Dr Richardson referred to Mali as a "good-natured elephant" adding "Mali's body condition was relatively good, although she is slightly overweight."

The principal concerns that Dr. Richardson raised were that Mali's enclosure is too small and inadequate for her needs, and that she suffers from potentially serious untreated foot problems related to years spent on concrete and that she is alone. 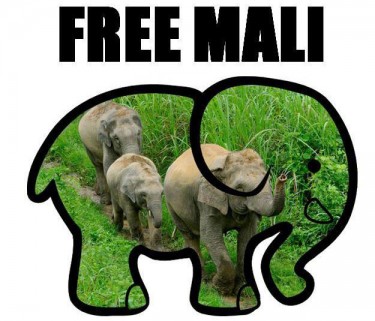 "From birth to death they live in a family of other females and young males."

In his report, Dr. Richardson noted that 18 zoos around the world had closed or were planning to close their elephant exhibits after concluding that the animals could not be properly cared for in captivity.

These include the Detroit Zoo, the Greater Vancouver Zoo and the San Francisco Zoo, which together have placed 14 elephants in two American elephant sanctuaries.

Dr. Richardson recommends that Mali be moved to a sanctuary by an organisation with expertise in transporting elephants, adding "while the Manila Zoo does the best it can with what funds it has, it just isn't sufficient, and in the case of elephants, good intentions are not good enough."

Dr. Manalastas said he respected the opinion of Dr. Richardson but said that the zoo was focused not on moving Mali but rather on improving her enclosure and care.

Dr. Manalastas stressed that the Zoo was not exploiting Mai, concluding "we don't make money off Mali.

"We are looking out for her interests. She has been with us for 35 years, and she has lived to an old age. We must be doing something right."

For more information go to www.petaasiapacific.com/feature-free-mali.asp