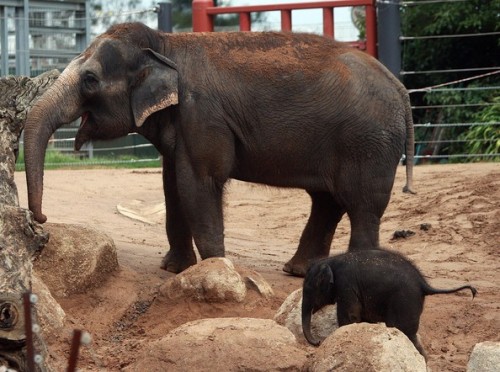 Melbourne Zoo staff are celebrating after the birth of an Asian elephant calf on Sunday (9th December), just days after the death of 11-month-old elephant Sanook.

Sanook died on Wednesday after becoming entangled in a toy tyre at the zoo.

The statement explained "both mum and baby are doing well and beginning to bond.

"In the coming days and weeks, the young calf will begin the introduction process to the rest of the herd.

"After the tragic loss of Sanook on Wednesday, this is a bitter-sweet moment for our zoo family.

"Our keepers are now focused on returning the herd to normalcy and caring for the latest addition."

The calf is the fourth Asian elephant to be born at the zoo.

Melbourne Zoo Director Kevin Tanner says it has been an unprecedented week for staff, explaining "it's very exciting news.

"Exciting for the elephant herd of course, but exciting for our elephant keeping staff who've had a bit of a rollercoaster week emotionally and this is just fantastic for them."

Tanner added that it was a very quick birth, stating "I actually missed the birth but the keeping staff were there and I saw them throughout the morning working with the calf and they were just fantastic."

Tanner says it will be a little while before the newest addition is named.

He concluded "what we normally do is look at the personality of the animal and then use those descriptive words to work with our Thai contacts and they change that to a Thai word for us."

On Wednesday, Tanner said the death of Sanook had left vets and other staff devastated.

CCTV footage revealed the elephant caught its head in a toy tyre in an unusual way that put pressure on its neck, preventing it from breathing.

Tanner said tyres are commonly found in zoos around the world and used as toys for elephants.