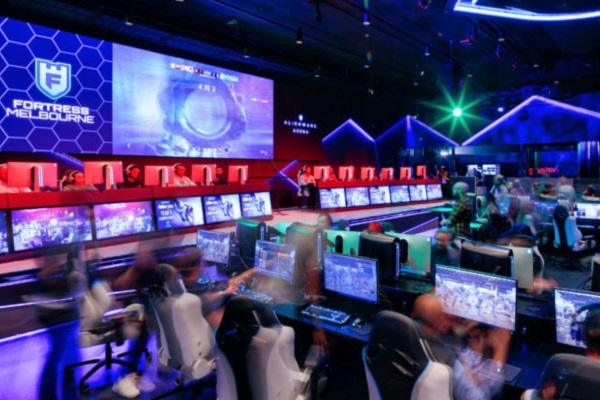 Described as the largest esports arena in the Southern Hemisphere, Fortress Melbourne covers over 2700 metre² and includes a range of purpose-built attractions including a 200-seat esports arena, VIP game booths, streamer pods, and an arcade gaming area.

The F&B spaces include the Tavern, a showpiece medieval-themed restaurant area complete with bookcases, chandeliers, flags and themed wall decorations.

Carolyn Viney, Chief Development Officer for Vicinity Centres, the real estate company behind the development, told the Daily Esports website “Melbourne continues to grow as an international city and will become Australia’s most populous city by 2021.

“With the night-time economy now contributing more than A$3.5 billion to the state every year, Fortress Melbourne is part of our market-leading destination strategy to introduce new entertainment concepts to attract and engage people who live, work or play in the CBD.

“Melbourne already hosts major game events like the Melbourne Esports Open and PAX Australia, and we’re excited to join that list of premium game experiences and open our doors to offer an amazing entertainment space that everyone can enjoy.”

Alienware and Dell’s sponsorship of the venue has seen Dell supply its main technology infrastructure for the entire venue while the arcade gaming area is equipped with over 160 fast Alienware PCs.

This week has also seen the ininal Esports Arena open in the Turkish city of Istanbul.