AFL to co-host eSports League of Legends event in Melbourne 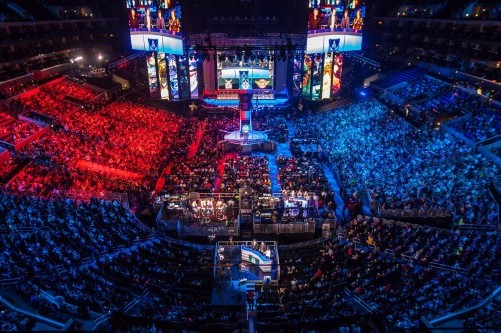 In a further sign of the growth in eSports, the AFL has announced a joint venture with the company behind the wildly popular League of Legends game that see a new tournament held in Melbourne later this year.

The AFL's agreement with the US-headquartered Riot Games, now fully owned by Chinese technology giant Tencent, is a first for the governing body of the biggest sport in Australia and follows two clubs, Essendon and Adelaide Crows, buying local League of Legends teams.

As part of the deal, the AFL and Riot Games will launch a stadium tournament in Melbourne in November, likely to be staged at Etihad Stadium, that will see the best players from the eight-team Oceanic League of Legends compete for their home states in a new short and intense competition.

The AFL’ General Manager of Growth, Digital and Aaudience, Darren Birch, says there are compelling reasons for the AFL to tap into the expertise of a digital-savvy partner that produces a game that has well more than 100 million players around the world each month.

Birch told the Australian Financial Review “if you look at our audience they are often engaged early in their lives, they play Auskick then, but we lose some of them when they became teenagers and we have to compete for their time with other things.

"League of Legends is something that has a lot of engagement in that 13 to 39 year old market, especially 13-24 year olds, who are very loyal to and to the brand that support it. So we can see the opportunities there, both in terms of what we can learn from Riot Games in a digital space and also commercial opportunities."

The AFL has had its own video game for a more than two decades, but the lack of worldwide interest in the sport means is restricting its global growth.

Football Federation Australia, for example, held a E-League tournament this year that saw players representing the 10 A-League teams play each other in the popular FIFA game. E-League games averaged about 130,000 viewers on the streaming platform Twitch each week, double expectations, and 12.5 million social mention impressions, while more than 100,000 people visited the A-League website via the E-League.

Birch wants the crossover between the AFL and its League of Legends foray to have a similar effectv and for other clubs to follow the lead of Adelaide and Essendon.

He adds "I think you can't just be looking at a traditional football offering if you want to keep expanding your audience. We've done research that shows 22% of AFL fans are also interested in e-sports, so there is a connection there. And I can see a time when our clubs having e-sports teams is just as common as having an AFLW team, a men's side or a netball team as some already do. The barriers to entry to having an e-sports team are low in comparison to doing other things."

Daniel Ringland, Head of Oceanic eSports for Riot Games, welcomes the AFL joint venture, which could lead to a purpose built e-sports studio in Melbourne that may be part of the upcoming $200 million revamp of Etihad Stadium.

However, he is cautious about a big increase in the local Oceanic League of Legends, stressing the same points as those in traditional sports do when considering expansion, commenting "we want to make sure we don't dilute the competition we already have, and we want to keep growing the strength of our secondary competition so when expansion comes it makes sense.

"But what the AFL do well is run competitions, put on events that you can make good money from and they are very good on the integrity side of things. That's what we want to do even better at Riot Games as well."

5th February 2018 - ESPORTS ARENAS TO BE LAUNCHED IN HOYTS CINEMAS