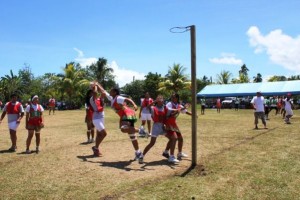 Netball Australia, in partnership with the Tongan and Australian Governments, through the Australian Sport Outreach Program (ASOP), has been recognised with a 'Best Practice' award by the World Health Organisation.

The Kau Mai Tonga program uses netball as a tool to increase physical activity among women and girls to combat non-communicable diseases (NCDs).

Implemented in Tonga through the Ministry of Internal Affairs and the Ministry of Health in collaboration with the Tonga Netball Association (TNA), the program has seen 6,000 women and girls involved in netball programs in the last twelve months.

Four of the five most common causes of mortality in Tonga are attributed to NCDs, with obesity among the highest in the world. It is especially problematic among women, with 75% being obese compared to 56% of men.

"The program is also a fun, fair, safe and low contact way for women to get physically active with their friends and family."

Tongan women are more sedentary than men because of a range of cultural and socio-economic factors, one of which is that sporting activities are often designed for and dominated by men, resulting in low levels of participation in sport.

The Kau Mai Tonga utilises a mass media campaign to encourage women aged 15 to 45 to do 30 minutes of physical activity through netball no less than three days a week to stop the harmful effects of NCDs such as diabetes, hypertension, heart diseases and cancer.

Netball Australia has been providing technical input through the ASOP program to assist TNA to build local capacity to deliver netball programs, including through staffing and resourcing the TNA office, establishing sound governance structures, developing and implementing coaching and umpiring frameworks and increasing a range of participation opportunities.

The program culminates with large-scale netball carnivals across Tonga and its outer islands throughout June and July, organised by the Tonga Netball Association.

Netball Australia is also assisting TNA to establish village-level participation opportunities to ensure more women can get more active more regularly, within their own communities, and encourage healthy behaviours through modified activities that encourage physical activity for all abilities.

Kau Mai Tonga was nominated through the Healthy Islands Recognition program and was presented with the award on Tuesday evening during the Ministers of Health meetings in Apia, Samoa.