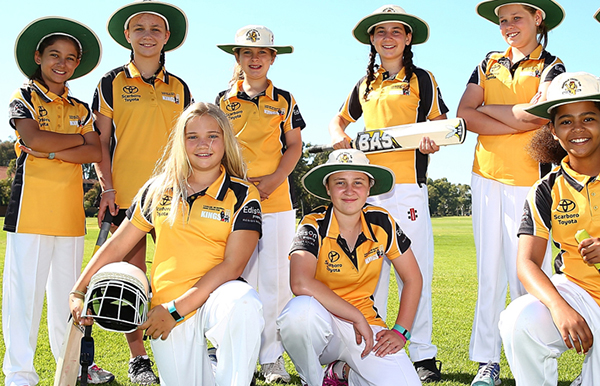 The popularity of cricket among women and girls is continuing to grow according to figures released today as part of the Australian Cricket Census which shows that, in 2018/19, registered female participation grew by 14%, including 873 new girls’ teams taking the field.

With females now making up 30% of cricket participants in Australia, Kieran McMillan, acting Executive General Manager of Community Cricket at Cricket Australia, noted "in season 2018/19 we have seen participation in cricket grow in many areas of the game with an unprecedented 1.65 million Australians picking up a bat or ball this past season.

“Of particular significance, female participation has continued to grow in line with cricket’s long-term goal to be Australia’s leading sport for women and girls.

“With a world champion national team, and an action-packed and standalone Rebel Women’s Big Bash League and ICC Women’s T20 World Cup Australia 2020 coming up this summer, the opportunity to inspire the next generation of girls is huge.

“Another catalyst for the growth of the female game is Cricket Australia’s Growing Cricket for Girls Fund that has been supported over the past four years by the Commonwealth Bank.

“The Fund is a trailblazing initiative that has supported 99 community associations, 10 school sporting associations, 531 clubs and 111 schools develop girls’ teams or develop an all-girls competition since 2016."

In addition to the growth in female participation, cricket continues to diversify its appeal with increased involvement of Aboriginal and Torres Strait Islander people (up 6.4%), people from a multicultural background (up 9.2%) and people living with a disability (up 5.1%).

McMillan added "it is extremely encouraging to see Aboriginal and Torres Strait Islanders embrace the game in greater numbers, with cricket growing exponentially in Indigenous communities since 2013.

“293,290 multicultural players and 27,183 people living with a disability have made cricket as a sport of choice as the game broadens its focus on engagement, participation and positive social outcomes.”

Cricket now has a presence in 66% of primary schools across the country and over 965,000 children were involved in curriculum-aligned cricket programs of four or more weeks, an increase of 111,000 children from 2017/18.

McMillan considers “the introduction of new junior formats and a refreshed entry level program - Woolworths Cricket Blast - is in response to changing expectations of kids and parents and within an increasingly competitive landscape of recreation options.

“The environments for kids to learn and develop confidence need to be fun, inclusive and action-packed. We feel we’ve now got an offering that is based on sound research and will enable Australian cricket to strengthen its junior playing base and inspire more kids to join and stay in our game.

“The connection with the BBL and WBBL is also important so that there is a direct link between the colour and excitement of our popular domestic T20 leagues and the experiences at the local club.

“With over 2,800 Woolworths Cricket Blast centres and 80% of the 227 junior associations around the country offering modified formats, we have a strong platform for future growth.

“Almost one million kids participated in cricket in schools this year, assisting in the development of physical and social skills, as well as making friends along the way.

“A strong culture of cricket in schools is a great foundation for the future generation of players and that’s why we also help teachers by having a program that aligns to the school curriculum, making it easier for them to do their jobs."

Click here for a detailed breakdown of the Australian Cricket Census.