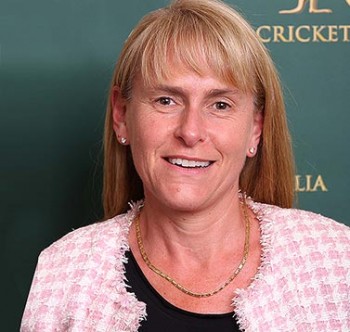 Hey was one of three independent directors who were unanimously elected at CA's historic annual general meeting held today (25th October) in Melbourne.

They join a revised nine-member board that will eventually become fully independent, replacing the old 14-member, state-based board structure.

The changes were made as a result of the Crawford-Carter governance review of Australian cricket.

Hey told the AGM she had achieved modest success on the field, but would bring plenty of business expertise to the board.

She was the former Chief Executive at Ericsson and is currently a professional non-executive director on the boards of the Bendigo and Adelaide Bank and SBS.

She explained "my background, I hope, gives and will bring a bit of a different expertise to the CA board.

"I am a woman and a mum, so I hope I can help with those cricketing segments as well.

"As I look at this audience of over-achieving cricketers, I worry a bit about the pride I feel in my one cricketing trophy that sits there from the 1988 local competition, proudly in my office at home.

"So I'm not going to go into my pedigree if that's okay.

"But one thing I'm not at all embarrassed about is the interest and enthusiasm I have in the game and its history ... and the desire I have to take cricket forward.

"I'm very happy to be judged on that and I know today you've made a very historic decision."

Senator Lundy said the board would now be well-placed to continue implementing enhanced governance structures, stating "Jacquie has a strong corporate background and passion for cricket and will bring a wealth of experience to the Cricket Australia board."

The AGM heard that CA had a record operating result of $45.6 million, due primarily to Indian media rights.

However, in advance of hosting the 2015 World Cup, CA has been confronted with figures revealing an alarming decline in crowds attending one-day internationals (ODIs).

Although overall attendances have grown over the past decade, the rise of domestic and international Twenty20 cricket has coincided with a dramatic decline in ODI crowds, from a total of 456,254 for the summer of 1999-2000 to 251,916 last season.

The fall in ODI crowds was more than offset by growth for Twenty20 internationals and the introduction of the domestic Big Bash League.

CA Chief Executive James Sutherland told Fairfax media that said TV ratings for one-day cricket remained strong while emphasising the need to act to arrest the trend before the World Cup is staged in Australia and New Zealand three years from now.

Sutherland stated "cricket is very fortunate to have three formats, and all our research shows all three are very popular. The new kid on the block is Twenty20 and it's inevitable there is a bit of shuffling of the deck chairs in terms of that popularity. We have seen one-day cricket somewhat affected by that.

"We support one-day cricket. We have a World Cup here in 2015 and we're looking forward to that, but we also believe there is an opportunity to distinguish one-day cricket a bit more, to improve that fan experience and improve the format of the game.

"We'll do lots of things here in Australia to support that but we're also working at ICC level to ensure the ICC is focused on development in that regard as well."