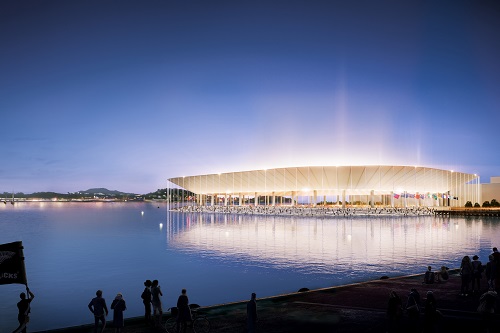 Peddle Thorp’s design of the Bledisloe Quarter for the Auckland Waterfront Consortium, incorporating the proposed waterfront stadium, ‘Arena Aotearoa’, has been selected as a finalist in the World Architecture Festival Awards in the Future Projects: Leisure Led Development category.

The World Architecture Festival Awards is the premier international architecture awards programme judged by global leaders in architecture. The winners will be announced in December of this year in Amsterdam.

Welcoming the endorsement of the innovative thinking behind the Bledisloe Quarter proposal, Peddle Thorp Director Richard Goldie stated “we’re excited to be able to present the design of the stadium and Bledisloe Quarter to the world’s best.

"This is a bold vision that has been recognised on an international level and we’re delighted to be selected as finalists. This an important moment for the project and New Zealand."

The planned centrepiece of the Bledisloe Quarter development is the waterfront stadium - which would be sunk into the harbour and seafloor - and, on its exterior would features step that run down to the sea. With a roof to ensure no events are marred by Auckland’s frequent rainy days, the stadium also allows for views from Rangitoto to Mt Eden through its transparent glass sides.

Goldie added “the Bledisloe Quarter and the waterfront stadium exemplify what is great about New Zealand and Auckland. It is the product of creative future-thinking grounded in a recognition of the value of our natural harbour, the environment, and our cultural and historical history as Tamaki Makaurau - the place desired by many. We’re thrilled to bring the concept and designs that result from this collaboration to a wider global audience.”

As the pre-eminent annual global architecture event, the purpose of the World Architecture Festival is to inspire, celebrate and share outstanding architecture worldwide.

5th May 2017 - Proposal submitted for ‘underwater’ stadium in Auckland