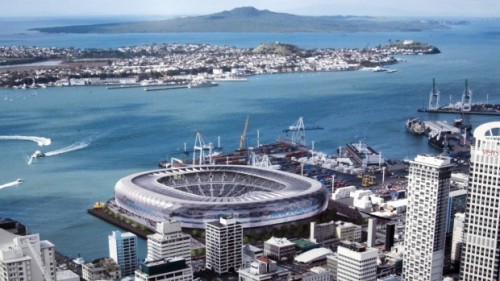 Proposals for a new sport stadium on the waterfront in downtown Auckland appear to be back on the agenda a decade after they were scrapped.

New Zealand Warriors Chairman Bill Wavish reportedly believes his club can secure funding $100 million in funding towards a new stadium, and hopes that the New Zealand Government and Auckland Council would fund the rest of the multi-million dollar project.

While the Warriors recently agreed a deal that will keep them playing their home NRL games at the ageing Mount Smart Stadium until 2028, beyond that date Warriors' Managing Director Jim Doyle wants a new multi-purpose stadium in the heart of the city

Doyle told media “to me, a city like Auckland deserves a downtown stadium..

"All public transport leads there, there are restaurants and cafes and it would be so vibrant.

"It could be shared between the Warriors, the Blues, soccer. So we could have games there on a Friday, Saturday and Sunday and each team would pick up a lot more fans because it would be easier to get to.

"For me, it's the only logical outcome for the city and possibly the country. I think it will happen, it's just a case of when."

The idea for a waterfront national stadium was first advanced by the then Labour government in 2006 with then Rugby World Cup Minister Trevor Mallard offering $500 million for the plan.

Proposed as the venue for the 2011 Rugby World Cup final and other major games, the proposal was backed by Auckland City Council, but opposed by the Auckland Regional Council and the Eden Park rugby establishment.

As in 2006, plans for a new stadium would see the downgrading and possible end of Eden Park and Mt Smart Stadium.

Regional Facilities Auckland Chief Executive Chris Brooks, who has been given responsibility of reviving Auckland's stadiums plans, says the waterfront stadium proposal needs to be investigated.

"That's a rectangular one, where you can play rugby, rugby league, football and have concerts.

"There's also the need to have a round oval like we want to develop at Western Springs.

"Our view would be that this is something the city needs to think about and we need to start investigating whether that's possible or not."

"It would have to be part of the debate, on where Eden Park fits in.

"You either re-invest in Eden Park, because it will need further investment, and that becomes your rectangular stadium. Or you do something else."

RFA’s most recent stadium plan from 2014 proposed that the Warriors to move to North Harbour Stadium, speedway to go to Mt Smart and cricket to relocate to Western Springs.

With the Warriors remaining at Mt Smart Stadium, RFA has announced speedway will remain at Western Springs until early 2019.

Warriors sponsor Vodafone is supporting the new waterfront stadium idea with Chief Executive Russell Stanners saying that the company would seriously consider sponsoring a new Auckland downtown stadium if it went ahead.

Highlighting Vodafone’s long and rich history in backing New Zealand sport, Stanners stated “we think a new stadium is an absolutely fantastic idea, and we would love to this become a reality for Auckland and the rest of New Zealand.”

Vodafone also supports a wide range of other sports – netball, football, Team Vodafone Sailing and Emirates Team New Zealand. Vodafone currently partners with the Chiefs, the Hurricanes, the Highlanders and the Crusaders.

When the 2006 waterfront stadium proposal was dropped, a $256 million redevelopment of Eden Park was undertaken for the 2011 Rugby World Cup.