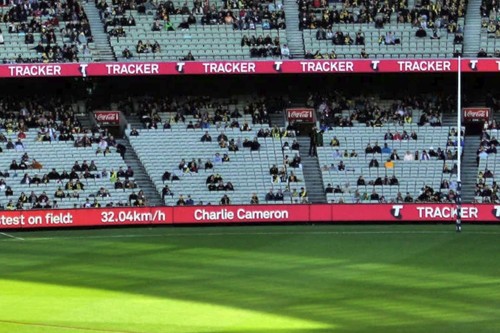 The AFL is to introduce real time player data  through in-stadium LED signage for fans at Melbourne’s Etihad Stadium and the MCG.

In a move designed to enhance the in-venue experience for fans, information from the AFL’s Telstra Tracker service is to be integrated into LED signage at the Melbourne venues.

The deal between Telstra, Champion Data and Dentsu Aegis Network sports and MKTG, will see fans informed of how fast and how far players are running throughout the game. Previously the data that has previously only been available via the AFL app and on the Channel 7 broadcast.

Introducing the technology, MKTG Managing Director Matt Connell explained “as a business dedicated to ‘making the moment mean more’, we jumped at the opportunity to work with Telstra and Champion Data to integrate live data from the match.

“For Telstra, it provides a meaningful brand alignment, and it takes Champion Data into another realm, ultimately improving the fan experience.” 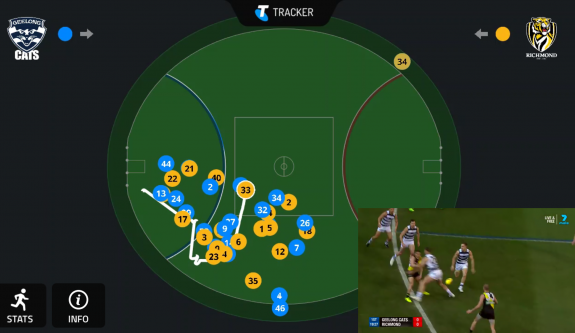 Champion Data Director Chris Hume added “we continuously strive to innovate; to capture and deliver new sports data which enhances the fan experience. This unique and powerful partnership with Telstra and MKTG creates new insights, live in venues, which fans will access directly, as a game unfolds.

“This project creates a bridge between fans and athletes, where the digital and physical converge. It is another layer in the story and has the potential to become a permanent feature for sports fans around the world. This exciting project is a global first: no other sport delivers fans such a comprehensive view of live player tacking data.”

Live Telstra Tracker data will be shown to AFL fans during rounds 4 and 5, including tomorrow’s Anzac Day match between Collinwood and Essendon.

Images: Live Telstra Tracker data at the MCG (top) and via the AFL app (below).