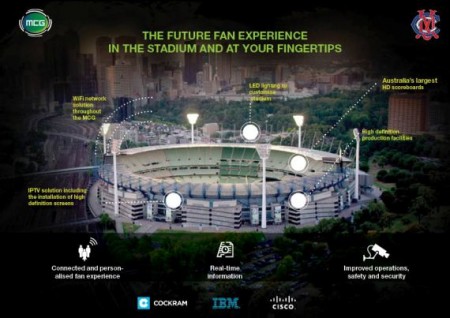 Fans visiting the MCG this AFL season are set to enjoy world-class connectivity, with the introduction of a high-density, free Wi-Fi network as well as improved 3G and 4G mobile network coverage.

Management claims that the new technology infrastructure "transforms the MCG into the most connected stadium in the southern hemisphere" and will significantly improve the fan experience throughout the venue.

The state-of-the-art Wi-Fi network allows fans to access real-time and interactive content, post and check in on social networks, use apps to check fantasy team scores and stream video – all without tapping into their own mobile data plans.

Commenting on the new technology, Melbourne Cricket Club Chief Executive Chief Executive Stephen Gough stated “we are delighted to be able to offer an improved MCG experience for the 2016 AFL season, with visitors able to stay connected wherever they are in the stadium.

Since December, more than 50,000 MCG patrons have connected to the Wi-Fi network.

Unsurprisingly, the longer-form Test matches played over the summer attracted more Wi-Fi users and data usage compared to the shorter BBL games – with day one of the Boxing Day Test recording the highest data use to date.

Gough added “we have received fantastic feedback about the free Wi-Fi throughout the summer and look forward to seeing how fans enjoy the enhanced connectivity during the AFL season.

“There are some big games scheduled for the MCG in Round 1, and we encourage everyone to connect and make the most of the improvements.”

The scale of the Wi-Fi project is on par with the world’s best and biggest stadiums, with more than 227 kilometres of cable installed to enable Wi-Fi connectivity throughout the entire stadium.

Gough went on to state “this project has involved significant investment by the MCC, and we have worked closely with our partners – including Cockram Construction, IBM and Cisco – to find the most appropriate and long-term technology solutions for the MCG and our patrons.”

Fans will also find it easier to use their mobile device wherever they are in the MCG. Telstra led the installation of the largest Distributed Antenna System (DAS) of its kind to improve the 3G and 4G mobile connectivity within the stadium.

Commenting on the project, Cisco Systems’ Director, Jonathon Dixon stated “fan expectations are greater than ever, mandating a more connected sporting venue that enables fans to share and consume relevant content and services, while engaging with more people from any device, anywhere in the stadium.

“Cisco is excited and honoured to be a part of the MCG’s long-term road map for transforming one of the most historic stadiums in world and creating unimaginable new experiences for fans in the future.”