Increasing recognition of the value of stadium advertising 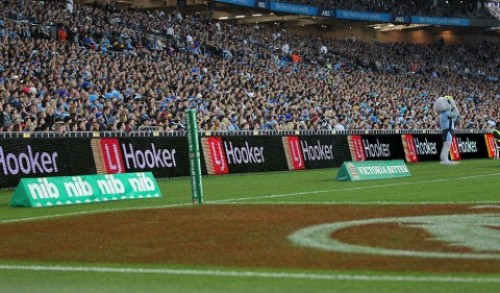 While advertising revenue for newspapers and in television is in decline, the value of perimeter and digital screen advertising in Australian stadiums is soaring.

With advertising having a massive impact in Australian sport (it is advertising revenue that is largely the driver of the massive broadcasting that codes like AFL and NRL have secured), digital signage and screens in stadiums have been through a decade or so of ongoing technological improvement.

Installed permanently in major venues and for just single games in smaller venues, the general operating model sees the companies that own LED signs providing and and operating equipment in exchange for a slice of the advertising revenue.

Technological advancement is also seeing signage open up new revenue possibilities although advertising agencies are still working out how to use them effectively.

Neil Maxwell, Chief Executive of Techfront Australia, says in India advertisers already have the ability to buy space for their brand for key events such as the last few runs before a batsman reaches a century.

Maxwell explains that revenue for key moments can be four times higher than the rest of the game, with key moment slots able to be sold in advance, or closer to the start of the game.

As a result, Maxwell believes there is space for more digital signage around sports events, stating "I just think the onus is on us to let the market know this is happening.”

Techfront recently purchased ScreenCorp in Australia and plans to set up an LED assembly plant. Its speciality is modular temporary signage for stadiums that don't host enough large events to justify permanent LED screens. Techfront sells some of the ad inventory to cover its costs and the rest is sold by the rights holder or competing teams.

For advertisers there are benefits such as changing messages or creative work from week to week, or tailoring advertising to each city. 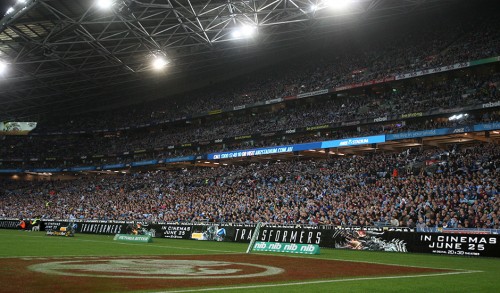 By dealing with venues, advertisers can bypass clubs and sporting codes to get their brand in front of a sports audience.

Simon Ryan, Chief Executive of Dentsu Aegis Network in Australia and New Zealand, explains “the Australian stadium marketplace is unique to other parts of the world, here, sports codes and clubs (and) teams do not have 100% ownership of the stadiums.

"Previously, this made it difficult for clubs to 'dress' or 'theme' the stadium for fans. The introduction of LED, in bowl, but equally on stadia facia, has allowed the sports (in this case hirers of venues) to theme the venue to their particular team or sport – significantly enhancing the experience for the fans."

Dentsu owns MKTG, which owns and operates screens at the Melbourne Cricket Ground and Etihad Stadium. It has exclusive rights for all in-stadium assets for AFL matches in both stadiums and all international cricket at the MCG. It operates the LED for Cricket Australia for all international and Big Bash matches.

The Red Cross Blood Service has taken advantage of digital signs to extend its "blood rule" television ads that screen on Channel Seven into stadiums.

Red Cross Blood Service Marketing Director Samantha Bartlett explains “the Blood Service currently has a partnership with Etihad Stadium and the Melbourne Cricket Ground to display the blood rule advertisement on their digital screens, and we intend to continue it next financial year.

"The blood rule works well in a stadium environment because it transforms what could be an annoying pause in a fast-paced game of football into an entertaining and informative way of educating people about the ongoing need for blood.”

Simkiss explains “clubs are allocated a large percentage of the time pre- and post-match for their individual theming and promotion of partners, and the LEDs have led to the creation of more engaging content that has been well received by fans.

"In-match time is shared between clubs, club and AFL partners, and other parties who purchase signage space through MKTG."

At first temporary screens were trucked in and out for major events, such as Techfront supplying signs at every stadium during the 2015 Cricket World Cup. However, at the MCG this has been replaced with permanent digital signage.

Under the deal OAMM will provide digital signs at every netball game during the season, including 28 televised games. In exchange, OAMM shares the ad inventory with Netball Australia and the competing teams.

There are strict rules in place to ensure rights holders do not sell brands that clash with team sponsors. But it is yet to be seen if this new digital model works for clubs as well as static signage does.

"This is the first year that LED signage is being used during the home and away season ... we've seen innovative club call-to-action messages, crowd participation through concepts like 'beat the ball' and club branding," she says, adding club sponsors get further integration opportunities, "beyond the traditional static signage used in previous national netball leagues".

Barclay Nettlefold, Chief Executive of listed outdoor advertising company QMS Media (and former Swimming Australia President), says his company is working towards selling week to week advertising that would let brands target all the matches of a particular sport for a short period. It is also working on dynamic auctions – brands competing to be in the background during cliffhangers and key events.

"That is a horizon where we want to get to, no doubt.

"But it is also about making sure that we are in unison with clients – making sure we have creative (material) ready to go, which has its own complexities."

OAMM, which has permanent signs in large stadiums such as ANZ Stadium and the SCG, was recently purchased by QMS $11.25 million.

Nettlefold adds “pople are watching sport for sport and that's when digital signs are at their best.” 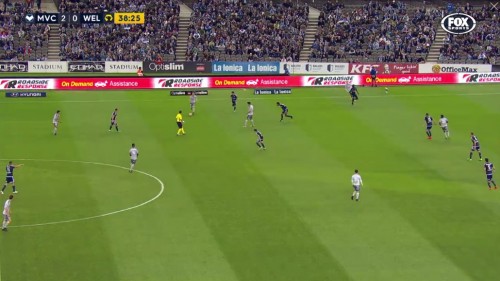 QMS is working out how to collect data to quantify the effectiveness of digital sports signage, which is currently priced too cheaply, Nettlefold believes.

In part, this is a result of sport stadium signage not being counted in industry figures for out-of-home (OOH) advertising, according to a spokeswoman for the Outdoor Media Association.

In addition, the Standard Media Index does count stadium signage. A spokeswoman said stadiums recorded just $12 million of the $828 million it recorded for OOH advertising in 2016.

As a member of the Outdoor Media Association, QMS now has an interest in getting in-stadium advertising counted in the OOH category, but unless the whole sports sector is reporting then it won't work.

Cricket Australia is looking at including the value of digital signs in their next round of broadcast rights, according to Ben Armafio, its Executive General Manager of Broadcasting, Digital Media and Commercial.

Armafio told Fairfax Media “the ability to control the level of broadcast exposure for signage and branding at-match is one of the key objectives we will be investigating and considering in our next broadcast deal.”

Dynamic advertising could co-ordinate camera positions with a brand appearing on signs and commentators mentioning the brand.

Armafio added “we currently already sell key moments such as wickets, boundaries and milestones to sponsors. The only difference being that we do this beforehand and package it with their overall deals. We have and will continue to review several 'dynamic advertising' models and are open to the concept if it meets our needs.”

Material in this news item was extracted from The growing advertising revenue that you won't find in statistics, by Lucy Battersby, published by Fairfax Media.

OAMM signage at Sydney's ANZ Stadium (top and middle) and as seen on Fox Sports at Melbourne's Etihad Stadium (below).