WhiteWater schedules installations in over 25 countries 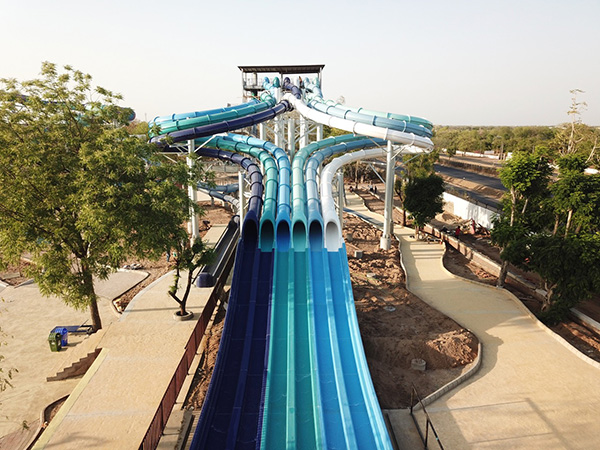 As they continue to celebrate their 40th anniversary, global waterpark supplier, WhiteWater, has scheduled installations set to take place in over 25 countries including the introduction of new products to the market. With a range of venue types from water and theme parks to cruise ships and resorts, WhiteWater’s project schedule is as diverse as it is exciting.

Starting the list, this year, is Kaisa Group, the Shenzhen-based property developer, who are working with WhiteWater to create a water park in Golden Bay, China near eastern Shenzhen. The water park will be part of a larger multi-function complex incorporating a theme park, theatre, sports centre, and hotel. Themed after a traditional Chinese fishing village, the water park brings the first Abyss with light effects to China. Towering nearly 30 metres into the air, the Abyss water slide is the largest funnel slide in the industry giving guests a feeling of extreme Gs before gliding into the pool exit. With coordinated light effects on the inside of the slide, riders will soon be able to soar through a kaleidoscope of colour as lights race by them. Once completed, the venue will have nine water slides, including a Constrictor + Rattler Fusion and AquaSphere + Super Bowl Fusion, as well as Kids’ Slides, a FusionFortress 17, Wave River, and Wave Pool.

Another park in the Asia Pacific region, Aqean Bay Boracay Water Park, will be a brand-new project for WhiteWater on the island of Boracay in the Philippines. Filling a seven hectare site, the water park will have 10 water slides, six Kids’ Slides, a Splash Pad, Wave Pool, Extreme River, FlowRider® Double, and RainFortress 5 once completed. Families with younger park guests will be able to create countless memories by enjoying the scaled down thrills of the park’s larger rides by riding the Mini Boomerango or Mini Rattler.

Located on the Ahmedabad-Mehsana Highway near Gujarat, Shankus Water Park opened in 1993 and quickly developed a reputation for high thrill attractions with their iconic Manta water slide. Now, nearly 30 years later, Shankus has decided to expand their park’s offerings by adding an AquaTube, Constrictor, Freefall, Pool Sider, Champagne Bowl, AquaSpray Toys, and Splash Pad. Quadrupling their footprint from three hectares  to 12 hectares, the highlight of the new expansion will be the park’s mat racer slide, the Whizzard. On the new six-lane Whizzard, guests will be able to race down 128 metres of slide, twisting around their friends’ slide path and plunging into an electrifying 360-degree loop before gliding out into the runout lane to see who won the race.

Ruchi Chaudhary, director of Shankus Water Park and Resort notes “The attractions were selected to cater to different age groups, their safety, and security. Our original water park rides were from WhiteWater back in 1993, and even now, we trust the quality of WhiteWater and hence selected all rides from them.”

Over in Qatar, Qetaifan Projects, a leading leisure company owned by Katara Hospitality, are building Qetaifan Island North, the first Entertainment Island in the country. Coinciding with the FIFA World Cup 2022, the Island will attract both residents and tourists alike for its unique elements and attractions. Partnering with Qetaifan Projects, WhiteWater will be building the Island’s 160,000 square metre water park to complement the project’s four-star hotel, residential complexes, and retail plaza. Inspired by the Qatari culture and themed after the region’s oil and gas industry heritage, the water park will break the world-record for the highest water slide at 80 metres tall. Once complete, the water park will have 36 water slides and be a global-scale public attraction.

New in Europe this year is the continent’s first LEGOLAND® water park at the Gardaland Resort in Italy. Having previously collaborated on multiple water parks around the world, the LEGOLAND® Water Park marks WhiteWater’s seventh collaboration with Merlin Entertainments. With distinctive theming spanning across the entire park, every age can enjoy some larger-than-life LEGO® fun. Little ones will be able to enjoy the DUPLO® Splash Pad, getting sprayed by hand-carved aquatic animals including an elephant and polar bear. With six water slides, including three Kids’ Slides, the LEGOLAND® Water Park will generate fun for the whole family.

The last exciting feature to be highlighted from WhiteWater’s water slide installations takes place on the seven seas aboard the MSC Seashore. The new Pirate’s Cove Aquapark is the latest aquatic amenity for the MSC fleet covering multiple stories and bringing excitement to cruisers with an AquaTube, Pool Sider, Slideboarding, Adventure Trail, and custom-themed AquaPlay 150 by WhiteWater’s Architecture team. MSC Seashore is set to debut in November 2021 in Miami featuring cruises to Ocean Cay MSC Marine Reserve, the exclusive private island destination in The Bahamas for MSC Cruise Lines. With sailings ranging in length from five to 16 days, the new Pirate’s Cove Aquapark is the perfect way to welcome guests back onboard for future sailings around the world.

Recently announced in the Americas, WhiteWater will be constructing a new world record-breaking attraction at Hurricane Harbor Chicago, next to Six Flags Great America. Once complete, the Master Blaster will be the tallest water coaster in the world standing over 26 metres high. This-state-of-the-art water attraction, named Tsunami Surge, uses power-saving Smart Blast technology to dynamically adjust pump speeds while the ride is in operation. The system saves significant power by only ramping up motor speed when it needs to drive riders uphill and reduces the wear and tear on the mechanical equipment. The thrilling new water coaster will propel riders through 290 metres of slide at a speed upwards of 46 kilometres per hour using water-blasting technology for lightning-fast uphill speeds and adrenaline-pumping drops.

In addition to the world record-breaking coaster, Six Flags will also debut the Midwest’s first Tailspin water slide at Hurricane Harbor Rockford. Also known as Tidal Wave, the water slide begins with riders launching into a darkened enclosed tube that quickly opens to reveal the Tailspin’s angled downward curve. Rafts are pinned high to the wall as they bank down and around the slide’s open spiral. Travelling from dark to light to dark again increases the suspense of the attraction, especially as riders are sent through three high-speed turns. Both the Master Blaster and Tailspin water slides feature WhiteWater’s AquaLucent fiberglass technology which creates a dynamic, dreamlike experience with breathtaking colour bursts and speed of light sensations.

Water parks are not the only projects that WhiteWater has this year, they will also be installing theme park stalwarts, water rides, at one of Vietnam’s most exciting new parks, Vinpearl Land. Located in Phu Quoc, the park will soon feature WhiteWater’s River Raft Ride and Super Flume. Once completed, the new VinWonders theme park will be the largest in the country with a size of nearly 50 hectares and 12 unique themes. The park will follow the formula established at Vinpearl, which combines wildlife, food, and fun with educational overtones.

In Adventure World, one of the 12 themed lands of Vinpearl Land Phu Quoc, will be the new Super Flume water ride ‘the Volcano Was Terrified’. The same size as a full-scale volcano, the attraction makes a lasting, visible impression on guests as it can easily be seen from across the park. Featuring boats that hold up to eight passengers, the Super Flume’s integrative narrative take guests on an immersive journey as families face the challenge of travelling through the terrifying Nevado volcano before the ride completes with a thrilling 17 metre drop! The water ride takes guests through three different levels of rivers in custom-themed boats painted with flames to match the ride’s volcano theme. Complete with added extras like a turntable for added surprise, the Super Flume keeps guests’ adrenaline high as they try to anticipate what feature is coming next.

With a flurry of excitement and installations in the year ahead, WhiteWater’s new projects are a sure sign of the bounce back our industry hopes to enjoy. As guests return to theme and water parks starved of these experiences, park gates look to flourish this summer as new attractions draw in big crowds ready to experience these new thrills.

To stay up to date with WhiteWater’s latest installations around the world, visit their website at www.whitewaterwest.com