63 people were arrested and dozens more injured during disturbances at the BW Festival in Gisborne on New Year’s Eve.

“This was an intentional riot that was fuelled by alcohol.

"It was obvious a plan had been put in place by the main agitators, which quickly spread through the campgrounds.

"We used every available police resource to try to keep control of the crowds.

“As the two groups battled each other it was like something out of the Braveheart movie and excessive alcohol consumption was the driver of it all.

“Most of the injuries people suffered were caused by missiles that were thrown.

“We’ve had disorder issues at BW in the past but this was the worst it’s been by far.”

“A definite mob mentality quickly developed amongst the crowd. It was dangerous for everyone – festival-goers, police, ambulance staff and security staff.” 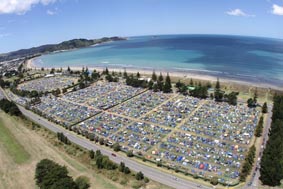 Burrows stated “we put serious amount of planning and resourcing into this, especially into controlling the behavior on the 31st.

"There were a number of things we did all week to help control the behavior and they worked very well for the week but on the last day it didn’t seem to work. It’s pretty early to work out where it went wrong.”

As a result, Burrows says the festival is at risk of not continuing.

He added “we’re into our 12th year and there has been a lot of hard work and planning over the years.

"The aim is to continue it but we have to sit down and talk with the emergency services and different parties and come up with the right solutions to make it a safe event and make it feasible.”

He added “I don’t see any reason for it not to go ahead again … it brings in a lot of visitors. "Economically it is good for us and the exposure is good for us …  20,000 people came and 63 got arrested to put it in perspective.”

Commander Aberahama told Radio NZ that those arrested during the incident face an variety of charges, from disorderly behaviour to assault with a weapon. He also said Police are considering charging some of those arrested with inciting a riot.

The event had a limited BYO alcohol licence.