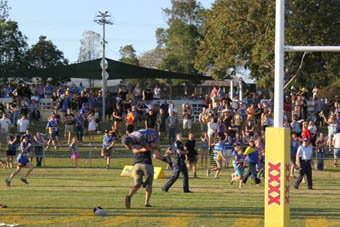 Weekend brawls at local Australian football and rugby league grand finals in Queensland and Western Australia would appear to highlight a need for enhanced security and alcohol management at community sports grounds when emotions run high during local footy finals.

At Broome in the Kimberley region of Western Australia, violence flared on Saturday (13th September) at the West Kimberley Football League Grand Final at which the Cable Beach Greenbacks beat the Looma Eagles.

The incident saw police and homes were pelted with broken bottles.

At Ipswich in Southern Queensland, a 100-person brawl erupted after the A Grade Ipswich Rugby League (IRL) Grand Final between Northern Suburbs and Brothers Ipswich on Sunday (14th September).

The incident, which occured after Queensland Police arrested a man, resulted in a Police officer suffering head injuries after being punched and knocked to the ground.

With Police at the scene calling for urgent back-up, 12 police crews, consisting of at least 20 officers armed with capsicum spray and tasers, arrived at the scene to regain control.

With the Broome incident, alcohol consumption has been blamed for what Western Australian Police Senior Sergeant Brendon Barwick referred to as "general anti-social behaviour."

Senior Sergeant Barwick added "(there was) large-scale alcohol consumption (and) at one stage it's estimated there was probably between 200 to 300 people on the street."

He added that Police were out-numbered and could only monitor the crowd from a safe distance.

Gordon told the ABC "we had guys on the gate and people patrolling inside and I asked for police presence so police were on the inside the gates virtually searching every odd car confiscating any alcohol.

"In the light of day, when things calm down, we'll talk about it as a league."

In Ipswich, media reported witnesses as criticising the Police for heavy-handed tactics and "unfair" harassment.

Queensland Police Inspector Keith McDonald told the Queensland Times that "alcohol was a factor in the whole incident" but added there were no moves to suggest IRL games should be alcohol-free.

Inspector McDonald stated "we can't let the behaviour of a couple of people impact on the general community."

In recent years there has been a trend towards AFL and rugby league grounds and carnivals becoming alcohol-free with the Murri Rugby League Carnival, being held in Redcliffe later this month being cited as an example.

This event has previously been held in Ipswich.