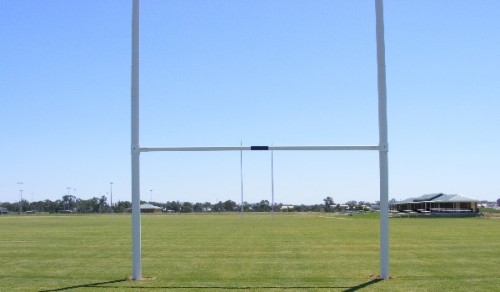 The head of NSW Rugby League says aggressive parents might need to be banned from junior matches after a father was seriously injured in a fight at the weekend.

Gary Harling, 47, was bashed in a fight at a sports oval at Glenwood, in western Sydney, on Saturday following an under-12s rugby league match.

He remains in hospital with serious head injuries.

His wife said he was punched to the ground by one man and then held up by two other men and repeatedly punched. This then sparked a clash that reportedly involved up to 30 parents and led to Police being called to the scene.

The bashing highlights a problem at junior rugby league games, which now has some administrators considering a sideline ban for parents.

Spectator bans have been backed by NSW Rugby League General Manager Geoff Carr, who said the attack on Harling was "unacceptable".

"If it comes to that we will (ban parents), but we're hopeful that the parents will get the message," Carr told Macquarie Radio this morning.

"What occurred on the weekend is unacceptable, so we've got to make sure that parents take responsibility for their own actions.

"They've got to be aware that there will be strong consequences if they don't."

Police arrested a 34-year-old man on Saturday, but released him without charge after questioning.
AAP