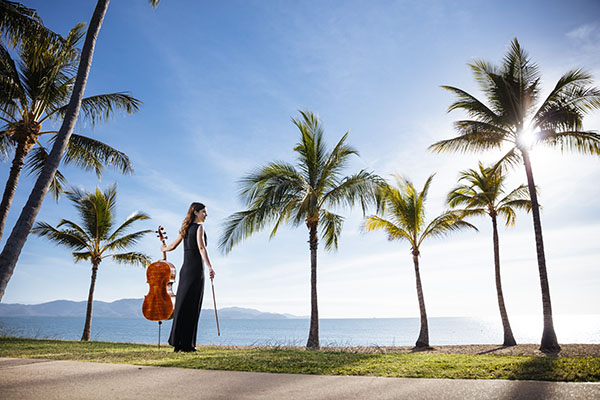 While Townsville has recently received much attention for being the host of the 2021 State of Origin opening game next week, the north Queensland city is also where the 30th Australian Festival of Chamber Music will take place from 23rd July to 1st August - a joyous 10-day celebration of music curated by Artistic Director, Kathryn Stott in her third and final festival, themed, Carnival.

Over 30 music-filled years based in Townsville, the Australian Festival of Chamber Music (AFCM) has forged a reputation as one of the best chamber music celebrations in the world, one that attracts leading music makers and music lovers from all corners of the globe, and while 2021 presents its challenges, Stott has created a program that’s extraordinary.

Featuring 133 works, 112 composers, four world premieres and five Australian premieres the program stars more than 40 Australian musicians, 15 in their AFCM debut, as well as three ensembles including the Goldner String Quartet in their 25th anniversary year, and three local groups including the acclaimed Dancenorth.

Stott notes “what a rollercoaster we have all been through with such unimaginable times on a global scale. The world of live music became eerily silent for far too long, but I am so excited about an absolute thriller of a Festival program for 2021! I am incredibly proud to bring together such an outstanding group of Australian musicians.”

Young stars will also feature at AFCM including 22-year-old violinist Grace Clifford and 24-year-old Australian pianist Kevin Chow who will appear as part of his ABC Young Performers Award. In thrilling news, violin prodigy, 14-year old Christan Li will also travel to Townsville to perform. Christian will be the youngest ever artist at AFCM and indeed made history in 2018 when just 10 years old, became the youngest performer to ever win the Yehudi Menuhin International Competition for Young Violinists in the Junior Category.

Highlights in the 2021 program include:

To celebrate the Festival’s 30th anniversary, AFCM has commissioned Yorta Yorta composer Deborah Cheetham AO’s work Nginda Ngarrini Bi Ngya featuring herself singing alongside David Greco (baritone) and the Goldner String Quartet, in the language of the Wulgurukaba people as acknowledgment of their culture and as the traditional owners of the land on which the Festival resides. This important work will have its world premiere at the opening night concert, PARADE.

While COVID-19 stopped the world celebrating Beethoven’s 250th anniversary in 2020, Artistic Director Kathryn Stott pays tribute to this great composer (voted Australia’s favourite composer in the 2020 ABC Classic’s Top 100 Composer countdown) with a full day of music (this is in addition to the Goldner Variations concert on July 24). The evening concert salutes his Kreutzer Sonata and features two world premieres – Dancenorth’s specially curated choreography in response to the novel, The Kreutzer Sonata by Leo Tolstoy, directed by Amber Haines, as well as Roderick Williams’ Not Here Yet, performed by Jacqueline Porter (soprano) and Kristian Chong (piano).

AFCM will perform composer Paul Rissmann’s chamber version of Stan and Mabel, the wonderful story by Jason Chapman of two friends (a dog and a cat) who start an orchestra. A local children’s choir will be part of the performance.

The free Queens Garden Concert will be held on Sunday 25th July at 3pm and the much-loved Concert Conversations return as six Conversation Concerts over the 10 days. Bookending the Festival is the opening concert titled PARADE, and the closing night concert, CELEBRATION, and in between, a degustation of music to uplift. What’s more there are two superb concerts on nearby Magnetic Island to tempt visitors too.

For more information and tickets go to www.afcm.com.au