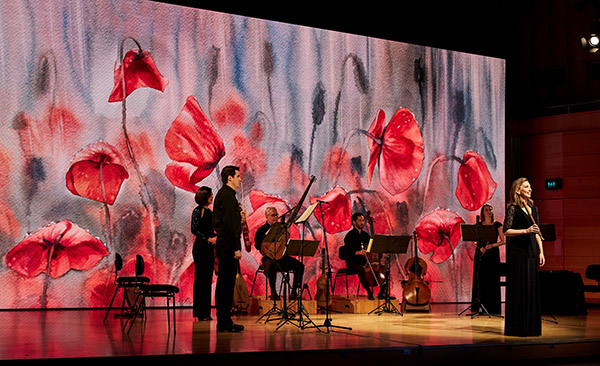 The season of five socially-distanced concerts will celebrating chamber music from the English and French Baroque, Ayres & Graces will be directed by Principal Baroque Flute/Recorder Melissa Farrow who leads an ensemble of Brandenburg musicians performing on an eclectic combination of period instruments.

This special event marks the Orchestra’s celebratory return to live performance, City Recital Hall will be transformed into a world of colour and sound, with the Brandenburg musicians for the very first time performing before a stage-wide LED screen illuminated with images from both sides of the English Channel. The stunning imagery curated by Australian designer Silvana Azzi Heras will blend with a musical offering of pastoral folk songs, heavenly trio sonatas and intimate chamber music alongside stately works of grander scale.

In addition to the live concerts, Australian Brandenburg Orchestra will also present a digital première of the concert on 1st November on its new digital concert platform Brandenburg One.

Australian Brandenburg Orchestra Co-founder and Artistic Director Paul Dyer advises “Sharing the electricity of live concerts is what I've missed most this year. I’m absolutely ecstatic that the Brandenburg musicians will be back on this stunningly transformed stage performing the exquisite Ayres & Graces program."

“And I’m equally thrilled to be able to offer a broadcast quality production of the concert to audiences who can’t secure a ticket or who live outside Sydney. Our new digital platform Brandenburg One has been a tremendous success, with almost half of the total audience residing outside Sydney, Melbourne and Brisbane - the cities we regularly perform in – and viewers have tuned in from over 70 countries around the world. We are pleased to be reaching one third of these viewers under the age of 35. I’m just elated to be able offer such a broad audience the opportunity to experience Ayres & Graces.”

The Orchestra will work closely with Sydney’s City Recital Hall to adhere to strict COVID-Safe guidelines and ensure a safe environment for all. The socially-distanced season will see 400 seats available out of a venue capacity of 1,238, with additional health and safety guidelines and measures in place through the series.

Since 2003, the Australian Brandenburg Orchestra has been a member of the Major Performing Arts Group, which comprises 28 flagship national arts organisations supported by the Australia Council for the Arts. The Orchestra began regular touring to Queensland in 2015. Since its beginning, the Brandenburg has been popular with both audiences and critics.

The Brandenburg’s 20 recordings with ABC Classics include five ARIA Award winners for Best Classical Album (1998, 2001, 2005, 2009 and 2010). In 2015 the Australian Brandenburg Orchestra was the recipient of the Sidney Myer Performing Arts Group Award and in 2016 the Helpmann Award for Best Chamber Concert.

Further information on the Orchestra, program highlights and ticketing go to www.brandenburg.com.au/concerts/2020/ayres-graces