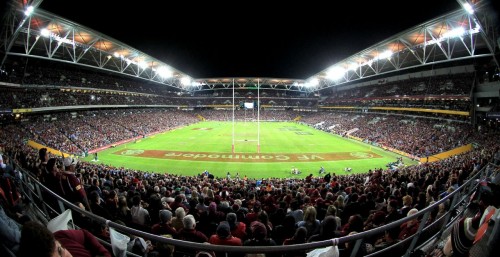 Brisbane’s Suncorp Stadium appears likely to secure the hosting of the 2019 NRL Grand Final in a move described as “a long-awaited coup for Queensland rugby league fans”.

With Sydney’s ANZ Stadium set to be redeveloped at the end of the decade, a News Corp report suggests that the Queensland Government and the NRL are discussing an offer for the hosting of the first NRL Grand Final outside Sydney.

The Victorian Government is understood to have also been considering trying to attract rugby league’s season finale to Melbourne.

The NRL has previously indicated the door is open for Brisbane to host a Grand Final while ANZ Stadium undergoes a $1.6 billion makeover. It is expected two premiership deciders - 2019 and 2020 - will be sold to non-Sydney venues.

However, the NRL wants the Queensland Government to commit to upgrade to the stadium's sound system, big screens and the addition of Wi-Fi.

She explained "once we know what grand finals are available we will be in a position to negotiate for the events.

"We know a grand final would bring up to 40,000 league fans to Queensland and inject more than $30 million into our economy."

The 2015 NRL Grand Final saw two Queensland-based teams, the Cowboys and Broncos, face off in Sydney.