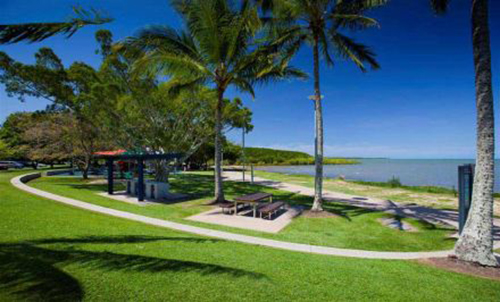 The Cairns Esplanade is the most visited location in Cairns, with more than 1 million people enjoying the parklands and its facilities each year. Under the Smart Urban Irrigation Project, 318 new sprinkler heads will be installed, along with flow and moisture sensors that will be connected to a smart network that will determine when irrigation is needed and allow for centralised management of the network.

Cairns Mayor Bob Manning advised “it’s one of the most important places in our region.

“There is an expectation that the Esplanade Parklands – particularly around the lagoon – are kept to a pristine standard.

“The current irrigation network on the Esplanade was installed when the parklands were first created about 15 years ago. It didn’t take into account all the extra facilities that have been added since then and isn’t giving us the efficiency that we’d like to have."

Mayor Manning said Council was working with CQUniversity to use ground surveillance technology that tests soil conditions, adding "initially, there will be a calibration process to work out the optimal soil moisture levels.

“CQUniversity is helping us out with this part of the project.

“Once the new infrastructure is installed, the network will be able to use that data to decide when irrigation is needed to keep the grass green without over-watering.

“We are positioning ourselves a leader in this technology for local government. There are many other councils who will be looking to us as a benchmark for smart watering.

“The new smart network will have many benefits - the most important of which is better control over water use, which we expect will lead to significant water savings.”

Master valves will provide an automatic shut-off in the event that the specified flow rate is exceeded due to a fault, and damage or blockages to the network will be self-reported via the central management software.

The project will be implemented in stages, starting with the Eastern Events Lawn at The Pier end of the Cairns Esplanade. Each stage requires a section of the parklands to be fenced off for up to two months while existing irrigation infrastructure is removed and the new network is installed. Drainage improvements and levelling will also be undertaken.

In total, the project is expected to take around 14 months, weather permitting. The staging takes into account major events on the Cairns Esplanade.

The $650,000 project includes a $250,000 contribution from the Australian Government through its Smart Cities and Suburbs grant.

Smart sensors and master valves are also being installed and integrated with existing irrigation at Munro Martin Parklands, the Cairns Botanic Gardens and Barlow Park.