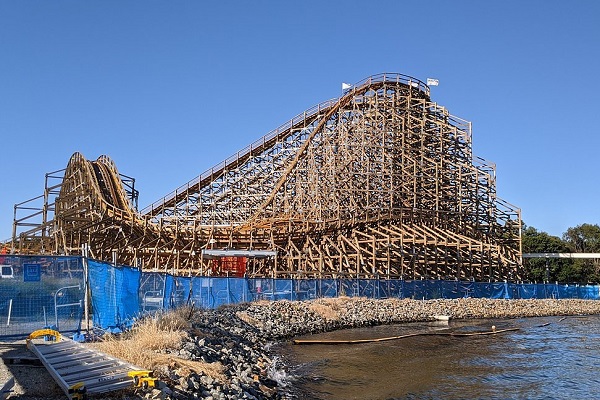 As reported by the theme parks enthusiasts website Parkz, most of the new ride's layout in place in the park’s New Atlantis Precinct with its ‘cathedral’ like structure visible across the site.

Parkz suggests that Sea World is on its way to creating “one of the best looking wooden coasters out there” that “if all goes well … (should) be up and running within six months”.

Parkz continues that the new rollercoaster “combines all of M&V/Gravity Groups signature manoeuvres, from airtime hills to their pioneering 90 degree banked turns, which were previously unseen prior to 2005”.

Sea World has also been in the news following an animal rights protest over the Easter weekend.

The Animal Justice Party and Dolphin Freedom Fighters were among several organisations who held a protest to ban dolphin breeding opposite Sea World on Easter Saturday (10th April).

A reported 90 protesters held signs and chanted to boycott Sea World who they accuse of breeding dolphins to “perform humiliating circus-style tricks for a dwindling number of spectators” to make a profit.

In characteristically combative-style, Randhawa said the protest, in which Queensland Police attended, was a “non-event” and a “waste of everybody’s time”.

Randhawa went on to say “last time there were activists who stormed into Sea World, our customers got quite irate, we had some customers try to hit them.

“It should be a beautiful day full of memories and it’s not fair on hardworking mums and dads who are faced with a bunch of ignorant individuals spreading misinformation.”