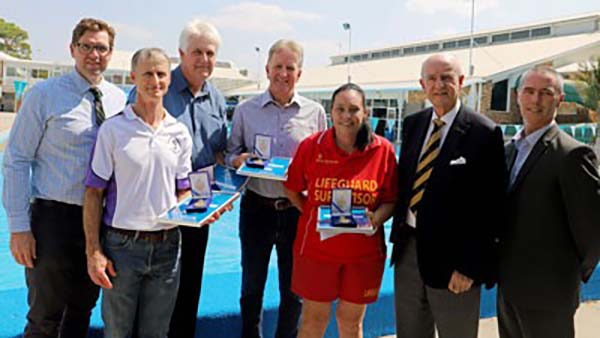 Four Toowoomba residents have been recognised by Royal Life Saving Society - Australia (RLSSA) for their split-second rescue and resuscitation actions at two city swimming pools earlier this year and in 2017.

Toowoomba Region Mayor Paul Antonio praised the efforts by all four rescuers stating “each of the new inductees showed a calm temperament and was able to focus on the skills gained through extensive training to start rescue and resuscitation procedures on two members of the public who required urgent assistance.”

Barry said the Society was pleased to admit the four new members to the Australian Resuscitation Club,noting “this honour highlights how anyone can apply their cardio pulmonary resuscitation (CPR) skills to save a life or give a person the best chance of surviving a life-threatening situation.

“Research supports the need for a swift response to start a rescue and CPR in providing the best possible chance of survival.

“CPR is a vital skill which people can use anytime, anywhere to potentially save a life.

“The Resuscitation Club was established to acknowledge citizens who have attempted to save a life of a fellow resident by applying CPR.”

Professor Pearn said the benefits of learning basic CPR skills meant that in the event of a car accident, being knocked off a bike or receiving a head injury there was a one in 12 chance that the first person on the scene would have the competency to render first aid.

Noting that the figure was as good as anywhere in the world, Professor Pearn asked "who are we going to help?

“People with these skills are more likely to step forward in the first 90 seconds to two minutes when this intervention is crucial when saving a life.

“Even if the resuscitation attempt is unsuccessful, it offers a grieving family some comfort to think that every effort was made to save their oved one.”

“People first need the knowledge and then have the presence of mind to apply CPR when a life-threatening event occurs.

“It is especially gratifying that the actions of our four inductees are being recognised by the RLSSA.”

The four recipients were presented with a numbered medal, lapel pin and a certificate of membership to the Australian Resuscitation Club.

In 2017, Toowoomba Regional Council’s senior lifeguard Toni Rice and team members rescued a young man with Down syndrome, who was discovered motionless in the deep end of the 50metre outdoor pool.

Rice started one-operator CPR and was quickly assisted by Dr Baker. The young man was revived and following a medical check has survived with no subsequent health issues.

In the second incident, Toowoomba Masters Swim Club members Marcus Ford and Lionel Scotney performed a rescue on a fellow club member who suffered a medical episode at a club meet at the Glennie Aquatic Centre in July this year.

Their quick actions and application of CPR allowed paramedics to transport the woman to hospital, but sadly she did not survive.