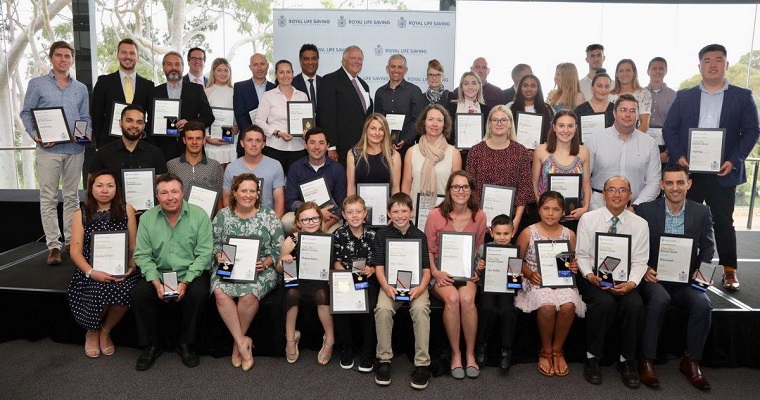 Outstanding acts of bravery in Western Australia have been recognised today at the 2019 Royal Life Saving Bravery Awards.

45 heroic individuals were honoured during a ceremony hosted at the State Reception Centre in Kings Park, attended by Western Australian Governor Kim Beazley.

Royal Life Saving WA accepts nominations for the Bravery Awards throughout the year, to identify and reward people in the community who have taken extraordinary actions to save, or attempt to save, another person’s life.

This year, the Awards acknowledging a wide variety of individuals, including children and adults, who have performed acts from in water rescues, through to performing life-saving first aid on the road side.

Advising that each award recipient displayed exceptional courage, empathy and initiative by applying lifesaving skills in emergency situations and sometimes at risk to themselves, Royal Life Saving WA, Chief Executive Peter Leaversuch stated “these individuals are an excellent example to all Western Australians and show how vitally important it is to obtain lifesaving skills.

“They’ve applied their skills to save another’s life, showing bravery and commitment in doing so, and deserve our highest recognition.”

The recent Royal Life Saving National Drowning Report revealed that more than 60% of Western Australia’s drowning deaths occurred in the warmer months of spring and summer during 2018/19. Mindful of the approaching summer, Leaversuch added “as we enjoy the warmer weather at this time of the year, I encourage everyone to think about how they might, in their own way, contribute to drowning prevention, and saving lives.

“It may be to improve your own skills in CPR, first aid or rescue, to raise awareness amongst your family, friends or workplace, or to help someone in need.”

Everyone can be a lifesaver.”

Mackenzie phoned the ambulance and her mother, made her grandmother comfortable and kept reassuring her until the ambulance arrived.
Underground carpark, Cockburn - September 2018

Seth Eade (nine years old)
Seth’s younger brother, Kade, got into difficulty in the water and Seth swam to his aid, holding his head above water until adults arrived to assist
Lake Leschenaultia - March 2019