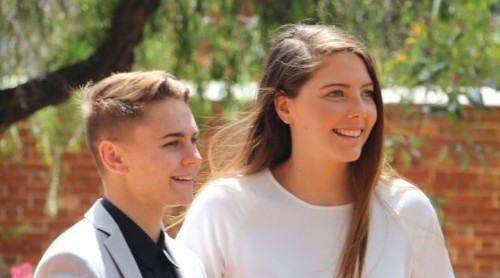 As reported by Royal Life Saving WA, Annetts recalled “when we were aware that Ian was suffering a stroke we all instinctively went into LG 1,2,3 mode.

“Communication was to the forefront of our response; there was lots of chatter between us and looking back after the event it was almost textbook.”

The four lifeguards quickly assessed the swimmer’s signs of life: finding that he was not responsive and was foaming around airway. After unsuccessful attempts to clear the airway, CPR was commenced with oxygen and defibrillator pads applied. After doing the initial assessment the defibrillator advised that no shock was required and the lifeguards continued CPR.

While the lifeguard team was working on the man, all of the pools were evacuated and reception area closed, and an ambulance was called.

Emergency services arrived and paramedics applied their pads and monitoring equipment and inserted artificial airway and continue with airbag. Lifeguards and paramedics worked together on causality for about 20 minutes on pool deck before transporting the causality to Fiona Stanley Hospital.

Annetts advised that after the ambulance left “we were aware Ian had a pulse and was breathing.

“We had an intense debrief, our employer gave great support.

“The rescue team all felt like a huge dark cloud was over our head till the next day when we got the news that Ian was okay and no permanent damage occurred. It was such a relief to hear that news.”

Mitchell was diagnosed as having had a serious stroke and was kept in hospital for several days before commencing home rehabilitation. He was later able to visit the rescue team a few weeks after the incident to say thank you for saving his life.

Annetts added “Ian and his wife Robin were amazingly grateful, and their son James emailed a heartfelt thank you. The City put on a morning tea where we all got together and shared our emotions to the whole event; it was a way of closure I feel.”

Royal Life Saving WA acknowledge that Annetts and his colleagues are huge advocates of learning CPR and first aid, and keeping those skills updated.

Image: Tia Stonehill and Parris Laurie at the ceremony where they received their Gold Star Bravery Awards from Royal Life Saving WA.