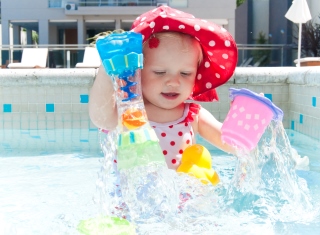 Explaining the significance of the program, Lauren Nimmo, Senior Manager Health Promotion and Research at Royal Life Saving Society Western Australia states “the Keep Watch program has educated parents and made them more aware of the risks and how to keep their children safe when around water.

“We also have some of the most comprehensive home pool barrier legislation in the country which has contributed significantly to this reduction.

“If the rates of toddler drowning seen 20 years ago had continued, 20 toddlers would have drowned last year.

“Instead only three toddlers drowned in Western Australia last year and while this is a pleasing outcome, we can’t become complacent as one drowning is too many.

“We need to continue to work towards achieving our goal of eliminating toddler drowning.”

The Western Australian Department of Health (WA Health) has supported the Keep Watch program since its inception and has contributed significantly to the improvements we have seen in toddler drowning. 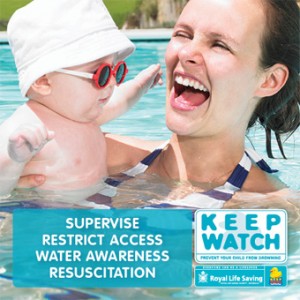 WA Health Assistant Director General Professor Tarun Weeramanthri, advises “the Department of Health and Royal Life Saving Society WA has had a long standing relationship based on a shared concern for drowning prevention, and it is a partnership that has yielded tangible and life-saving benefits for Western Australians.

“The Keep Watch program ensures families in Western Australia are aware of the need for supervision in and around water at all times, and understand the importance of water safety.

“I do not want any family to have to suffer the tragedy of the loss of a child or a near drowning incident and ask parents to be particularly vigilant around their children in these summer months.”

Despite the significant improvements in toddler drowning deaths, there has been a steady increase in the rate of toddlers hospitalised following a non-fatal drowning incident.

Nimmo adds  “on average we see a 14% increase in the rate non-fatal drowning each year in Western Australia.

“Last year, 57 children were hospitalised and a further 77 presented to the emergency department following a non-fatal drowning incident.

“Unfortunately many parents aren’t told the stories of when a child survives a drowning incident, and are unaware of the impact it has on their family and community.

“These numbers are alarming and we need to focus on providing more information to parents on the possible outcomes of drowning.”

Michelle Ostler, Keep Watch Ambassador, knows too well the impact that non-fatal drowning can have on a family. 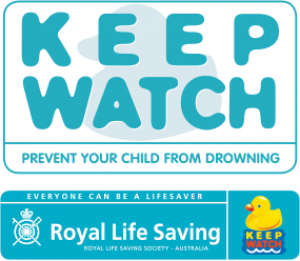 When her daughter Jewel was nearly three years old she was involved in a non-fatal drowning incident in a home pool, while being cared for by a relative.

The incident resulted in a lengthy hospital stay, and while Jewel survived her family continues to deal with the ongoing health issues and effects of the incident.

As Ostler explains “after it happened there were days when I would just be on the floor crying.

“ It was so hard to comprehend how this could have happened to my daughter.

“And now I have two teenage sons who are living through the trauma of seeing their sister pulled from that pool, and travelling to hospital with people fighting for her life.

“It still affects our life now four years later. When she came home from hospital Jewel had two words, Mum and No. She needed intensive speech therapy and although she has improved immensely she still has a language delay and is about 612 months behind other children in her class.”

Ostler has become a Keep Watch parent ambassador to help parents keep their children safe around water so they don’t have to go through the same experience she did.

Her message for parents is simple “always be vigilant. Never think you can leave the pool gate open because your children have had swimming lessons and you think they will be OK. You need to always be supervising your kids - that’s the number one message I would give.”

Nimmo concludes “we are urging all Western Australians to take toddler drowning seriously and get prepared for summer by making this upcoming weekend their home pool safety weekend – make sure to check that your home pool barrier has been well maintained over winter and is working properly, and remember to Keep Watch and keep your family safe this summer.”

The Keep Watch program is proudly supported by the Western Australian Department of Heath and BHP Billiton.