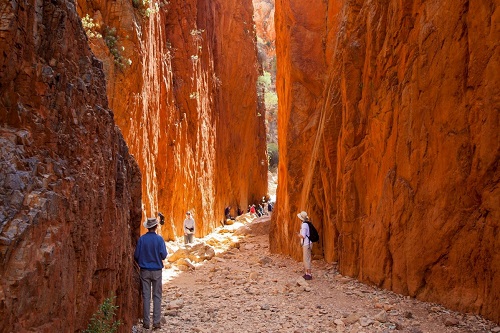 Park rangers in the Northern Territory are pleading with visitors to take notice of severe heat warnings in Central Australia after several walkers underestimated conditions over the weekend.

On Friday, three adults from the Philippines and a three year old suffered heat stress when they failed to take enough water while on a walk at Standley Chasm in the middle of the day in 45 degree heat.

In another incident, a couple from Melbourne took a wrong turn at Simpsons Gap and ended up on longer trail with only 600mls of water between them.

With the temperature expected to stay over 40 degrees for the remainder of the week in the Centre, rangers are asking visitors to re-think their walk altogether.

Kristen Hay, acting Senior Director for the Northern Territory’s Parks and Wildlife Operations stated “with the temperature sticking over 40 degrees we are asking visitors to Central Australian parks to consider postponing their walks or to walk very early in the morning when it’s cooler.

“Walking during extreme heat can be dangerous even deadly.

“Even if you are an experienced walker you must take precautions when visiting Territory parks. Walking in hot weather can result in heat exhaustion, which may progress to a potentially fatal heat stroke.

“If you must go for a walk, Beat the Heat and stay cool, stay hydrated and stay alive.

“If you do find yourself feeling unwell on a walk or disorientated, stop. Rest in the shade, drink water and stay there.

“Always carry plenty of water and food and drink regularly even if you don’t feel thirsty. You should drink at least one litre of water per hour when outside, per person.

“Tell someone where you are going and plan your route well including downloading maps and other offline tracking apps prior to your departure.

“Make sure you leave early in the day and wear sunscreen as well as light coloured clothes, long sleeves and a hat and take fruit or energy bars with you for snacks.”

Visitors to Territory parks can find out more about how to Beat the Heat at www.nt.gov.au/beattheheat

Image: Walkers at the Standley Chasm.