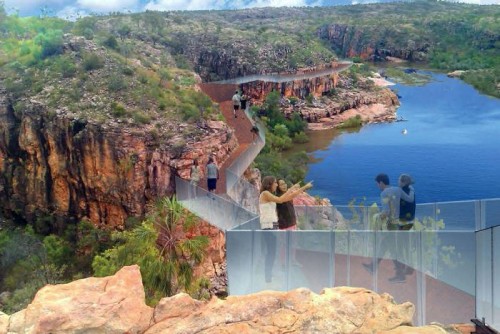 The Northern Territory Government has revealed plans for a 300 metre-long glass ‘skywalk’ and pedestrian bridge at the Nitmiluk Gorge.

Aiming to create a world-class tourist attraction, the skywalk, estimated to cost about $10 million, will extend over the gorge and along its cliffs, which climb about 70 metres high, offering bird’s eye views of the world renowned attraction.

Also known as Katherine Gorge, Nitmiluk Gorge and Nitmiluk National Park attract almost 250,000 visitors each year and the area is one of the best known tourist spots in the Northern Territory.

Announcing the plan, Northern Territory Chief Minister Adam Giles stated “we know that tourism is rebounding and if we can provide an improved product tourists will get an improved experience and then their word-of-mouth will bring more tourists back to the Territory."

Chief Minister Giles said the Government was budgeting to spend $20 million on building adventure tourism experiences, which would pay for the new skywalk, and another skywalk at a yet-to-be-disclosed location.

Details of the where the second skywalk is to be located may be announced in the Northern Territory budget on 24th May.

Traditional owners of the park, the Jawoyn people, have indicated support for the move. 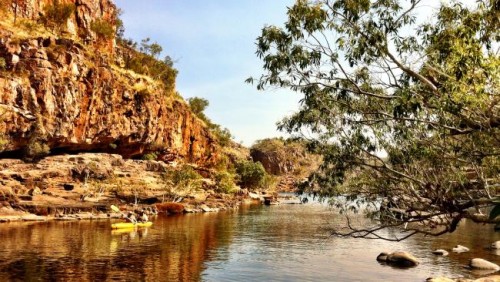 Chair of the Jawoyn Association Aboriginal Corporation, Lisa Mumbin, said in a statement that her people welcomed opportunities and investment.

Mumbin stated “our elders say we should always keep thinking about what we can do for visitors.

"We need to dream more and be open always to possibilities."

The walk is to be designed to blend in with the gorge's natural scenery, with a Northern Territory Government spokeperson advising “(this will be) achieved through the use of suitable organic looking materials, including perforated, rusted metal to enhance the natural hues of the gorge along with frameless glass balustrades to achieve maximum opacity and minimise obstruction of views.”

Northern Territory Parks and Wildlife Minister Bess Price said the skywalk would be adapted “seamlessly into its surroundings”, adding “with demand increasing for adventure tourism, this skywalk will add value to the park and allow the traditional owners – the Jawoyn people - to share their country and stories more widely.”

In October last year the Western Australian Government announced plans for a similar attraction in the Kalbarri National Park.

Images: How the skywalk will look (top) and the Nitmiluk Gorge (below). Courtesy of the Northern Territory Government.