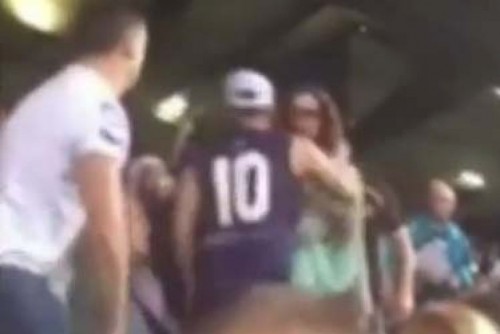 Perth Stadium Management is to apply a lifetime ban to a man charged with assault following an incident at the Dockers v Hawthorn AFL Preliminary Final at Perth’s Domain Stadium on Friday night (25th September).

A YouTube video emerged of a man hitting a woman in the stands during Fremantle's loss with the incident also prompting a stern condemnation from the AFL.

Subsequently identified, a 24-year-old man has been was arrested over the incident. He has been charged with common assault, obstructing a police officer, and disorderly behaviour in a public place.

The shocking video appeared on social media in the hours after the Dockers exited the finals series and shows a man wearing a Michael Walters number 10 Fremantle guernsey strike a female patron to the face with his right hand.

In the footage, the man is quickly engulfed by surrounding spectators as other onlookers attempt to shield children from the violent outburst and usher them to safety.

The 38-year-old victim, who had asked the man to tone down his language, was treated by St John Ambulance officers for minor injuries.

Immediately following the incident, Perth Stadium Management, the managers of Domain Stadium, advised that it was “working closely with police and the Fremantle Football Club following an incident.”

It added that the man, who was apparently not a member of Fremantle Football Club will receive a lifetime ban from the venue and that he will not be permitted to attend any events at the Stadium into the future.

Immediately following the incident, Perth Stadium Management, the managers of Domain Stadium, advised that it was “working closely with police and the Fremantle Football Club following an incident.”

It added that the man, who was apparently not a member of Fremantle Football Club will receive a lifetime ban from the venue and that he will not be permitted to attend any events at the Stadium into the future.

A total of 11 incidents occurred during the Friday night game that required security to evict fans from the Stadium, with three of those requiring Police assistance.

Perth Stadium Management General Manager Gavin Taylor stated “99.9% of the fans that attended last night’s match were well behaved and supported their team in the spirit of the game (but) ware disappointed that the unacceptable behaviour of a small minority have tarnished last night’s game and the reputation of WA fans.

“With the exception of these instances the majority of fans passionately supported their teams in one of the most exciting and loud finals' atmospheres ever experienced at the Stadium.

"I can confirm that on being alerted of the issue the security staff and Police responded quickly and ejected the individual from the stadium” he said.

"Perth Stadium Management are committed to providing a great fan experience to all people at attend Domain Stadium. All of our staff working at our licensed areas have responsible service of alcohol certification. There is security on all bars to ensure no intoxicated patrons are served alcohol. We also have a mobile liquor liaison team in place to deal with any intoxicated patrons.”