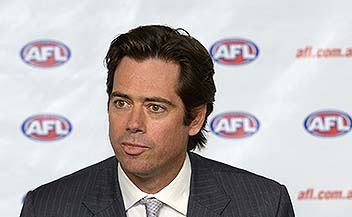 AFL Chief Executive Gillon McLachlan says the sport has zero tolerance for racism, praising the AFL community for coming together over the past week to embrace Adam Goodes. However, McLachlan has also been forced to defend his handling of the controversy, saying he has had to be careful with his language.

Amid the controversy over his booing, two-time Brownlow Medallist Goodes will return to training today (Tuesday 4th August) after a week off. He is likely to resume playing on Saturday night against Geelong at Simonds Stadium.

There is growing criticism of McLachlan and the AFL Commission for their actions last week in the midst of the heated national debate around Goodes, crowd behaviour and racism.

The day after West Coast fans booed Goodes in Perth at the end of round 17 and his Indigenous team-mate Lewis Jetta performed a war dance at the crowd, McLachlan was guarded in his comments and said it was a complicated issue.

McLachlan said a day later in an AFL statement that it was impossible to separate the issue from race. Last weekend, the AFL strongly backed Goodes with messages and gestures of support during round-18 matches.

In an interview with Channel Nine’s Footy Classified, McLachlan stated “what’s happened over the course of the week is that everyone has played their role.

“We took a highly combustible situation and I think we sit here today with a united industry.

“The next point of that is hopefully Adam coming and playing this weekend, hopefully respected and we go into a really mature discussion with racism. There’s a racist undertone, but I don’t believe everyone is racist.” 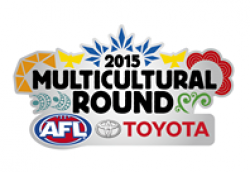 McLachlan said he had tried to speak to Goodes, but so far that had not happened.

The AFL boss admitted there were concerns last week that Goodes might not play again, adding “I feel more confident today, but I can tell you last week, that was a real fear.”

The AFL also released a statement on Monday, quoting Chairman Mike Fitzpatrick as saying the AFL Commission was unanimous in supporting Goodes.

However, Monday also saw The Australian report that the Commission’s response to the Goodes affair had been lukewarm because members’ views were divided.

This weekend is the AFL’s multicultural round.