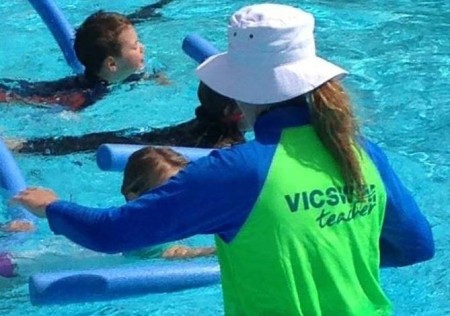 In addition, when asked to assess the relative importance of a set of eight water safety and aquatic skills, the majority also rated 'personal survival skills' as the most important, followed by 'water safety knowledge' and 'survival swimming strokes'.

This survey finding contradicts the views of swimming teachers from previous research conducted by both organisations where teachers were asked to rank the same skills from a parent's perception. Teachers of swimming and water safety believed that parents would value competitive strokes as the most important skills.

The 2013 survey 'Community perceptions of and attitudes towards children's swimming and water safety skills' aimed to further understand the effectiveness of swimming programs and characterise the group of children accessing swimming from the general community's perspective, particularly parents.

The survey is the third conducted in partnership by Australia's leading aquatic education and water safety organisations; AUSTSWIM and Royal Life Saving Society Australia, and is the culmination of four years of research.

The first National survey, conducted in 2010, explored the operations of swim schools across Australia as assessed by over 350 swim school managers, owners and coordinators. The second National survey, conducted in 2012, investigated the attitudes of over 6,300 teachers of swimming and water safety delivering programs at a range of aquatic facilities and locations across Australia. Results from the abovementioned surveys of this project, especially of the second, further confirmed the relevance of understanding the community's, particularly parents, attitudes and perceptions towards children's swimming and water safety skills, and prompted the third survey.

This third National survey was administered to parents of children aged five to 14 years old, from April to June 2013. Answers were also collected from parents whose children were not enrolled in swimming and water safety lessons, from parents of children aged outside the age range 5 to 14 years old, and from other members of the community who don't have children. The answers of 1,658 participants were used in the analysis.

The survey asked questions across a variety of topics such as: demographics, program accessibility and affordability, program effectiveness and awareness of water safety organisations.

A number of recommendations have been made aimed at improving the quality of swimming and water safety programs. These include that the industry considers the importance that parents are placing on personal survival skills, water safety knowledge and survival strokes, ensuring that survival strokes are taught, as well as considering responses given by parents regarding customer service and levels of feedback.

A full report of findings and recommendations from this research survey can be found on www.austswim.com.au/AboutUs/InformationCentre/Research.aspx

23rd May 2011 - NT DROWNING HIGHLIGHTS NEED FOR WATCH AROUND WATER