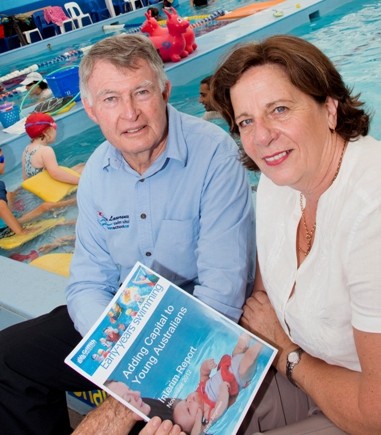 Children who learn how to swim at a young age are reaching many developmental milestones earlier than the norm, according to Griffith University researchers.

Professor Robyn Jorgensen from the Griffith Institute for Educational Research says the study, 'Early-Years Swimming: Adding Capital to Young Australians' shows young children who participate in early-years swimming achieve a wide range of skills earlier than the normal population. Many of these skills are those that help young children into the transition into formal learning contexts such as pre-school or school.

Professor Jorgensen explains "the research also found significant differences between the swimming cohort and non-swimmers regardless of socio-economic background.

"We also found no gender differences between the research cohort and the normal population."

Professor Jorgensen said that the survey data showed that children were achieving many milestones earlier than expected and that this was backed up by the intensive child testing that was undertaken. As well as achieving physical milestones faster, children also scored significantly better in visual-motor skills such as cutting paper, colouring in and drawing lines and shapes, and many mathematically-related tasks, hey also performed better than the normal population on measures related to following instructions.

Professor Jorgensen adds "their oral expression was also better as well as in the general areas of literacy and numeracy.

"Many of these skills are highly valuable in other learning environments and will be of considerable benefit for young children as they transition into pre-schools and school."

The project, the world's most comprehensive study into early-years swimming was a combined undertaking between Griffith University, the Kids Alive Swim Program and Swim Australia. Research involved the parents of 7,000 under-fives from Australia, New Zealand and the USA who were surveyed over three years. It also included intensive testing of 180 children aged 3, 4 and 5 years.

The research was instigated by Laurie Lawrence, who launched the research last week, and Swim Australia Chief Executive Ross Gage who approached Professor Robyn Jorgensen at Queensland's Griffith University in 2007 to test whether swimming in the early years had benefits for young children.

Over 50 swim schools across Australia, New Zealand and the USA contributed funds to enable the research to be conducted.

Professor Jorgensen has also recently had a paper 'Under-fives swimming as a site for capital building: Supporting and enhancing transitions' published in the Australasian Journal of Early Childhood Volume 37 No 2 June 2012.

• Children who participate in early-years swimming appear to be achieving many milestones earlier than the normal population across areas of physical, cognitive and language development regardless of social background or gender.
• Many of the skills that the early-years children are scoring well on have value in schooling and other areas of learning so they are likely to be better prepared for the transition to school.
• It may be of national benefit for children who traditionally do not do well at school, particularly in the early years, to participate in early-years swimming. This may help in the transition to school but also for the obvious benefits of water safety and general well being.