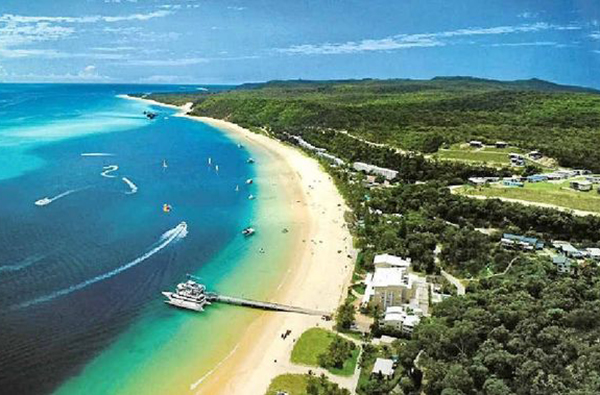 Keen bush walkers can now enjoy 360-degree views of Moreton Bay and Quandamooka Country from a lookout atop one of Minjerribah’s  highest peaks.

Queensland Tourism Industry Development Minister Kate Jones said projects like the Mount Vane walk are crucial for the future of Minjerribah, stating "tourism is Queensland’s most sustainable industry. We’re working with the Quandamooka People, to develop the next generation of eco and cultural tourism experiences.

“With its upgraded campgrounds and recreational trails, unique cultural experiences, and Australia’s best land-based whale watching, Minjerribah will be recognised globally as a leading eco and cultural tourism destination.

“Minjerribah is home to some of the most striking scenery in Queensland, with original eucalypt and scribbly gum forests containing rich and ancient cultural heritage.

“This offers walkers a half day of trekking to special sights like Karboora (Deep Silent Pool, also known as Blue Lake) and a number of peaks with sweeping views over 18 Mile Swamp to the Gold Coast.

“Naree Budjong Djara National Park, which covers about 50% of Minjerribah, is cared for by the Quandamooka People’s Land and Sea Rangers in partnership with Queensland Parks and Wildlife Service.

“The Mount Vane walk is one of the many new ecotourism experiences we’re delivering on cross the island over the next few years, as part of the economic transition strategy.”

“Ecotourism makes sense for Minjerribah. More than 20 Quandamooka rangers were involved in the design and construction of this track and research has revealed that walking tourism alone has the potential to pump $16 million a year into the local economy,” she said.

The southern end of the Adams Beach campgrounds is being transformed with environmentally and culturally sensitive beachside accommodation including eco-tents, glamping and safari tents, alongside specially designed containers transformed into glamorous cabins. The upgrade is expected to be completed in time for the winter school holidays.

Quandamooka Yoolooburrabee Aboriginal Corporation Chief Executive Cameron Costello said the state’s tourism industry was undergoing a cultural awakening with the realisation that Aboriginal country, culture and people were critical to its future success.

Costello advised “the Quandamooka People have always shared the sanctuary that is Minjerribah, with visitors who respect our values and connection to Country.

“Today we are excited by the potential of low impact, sensitively-designed eco and cultural tourism that allows visitors to experience the beauty of our land and the traditions of our ancestors while contributing to real economic opportunities for Traditional Owners through business and employment.”

For more information on the recreational trails project, including public consultation, and the Adams Beach campgrounds upgrade go to qyac.net.au