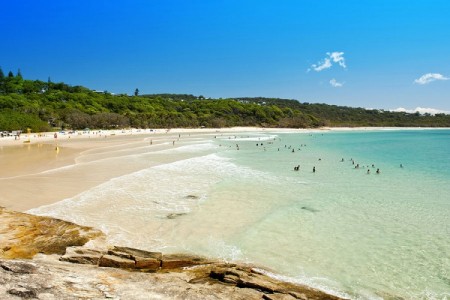 The Quandamooka people have won native title recognition over most of North Stradbroke Island.

The decision will give the Quandamooka people an increased role in managing national parks on the popular tourist destination island, were the Queensland Government is working to phase out sand mining.

Most of the area covered by the native title determination will not give the Quandamooka people exclusive rights, meaning existing usage remains unaffected.

The Federal Court, in a special sitting on the island, signed off on the native title decision, granting the Quandamooka people non-exclusive rights to 22,639 hectares of land, including areas of national parks, reserves, unallocated state land and leases.

The area takes in part of the Moreton Bay Marine Park to the northwest of North Stradbroke Island, including Peel and Goat islands.

The Federal Court has agreed that the Quandamooka people should get exclusive rights to 2,264 hectares of land on North Stradbroke Island, including pockets of land near the Amity and Dunwich townships.

In a statement, the Queensland government said the Quandamooka people's claims could not cover private freehold or many types of leasehold land, so the majority of North Stradbroke Island landholders would not be directly affected.

The statement said "the Quandamooka people now have recognised rights, including the right to live and conduct traditional ceremonies; take, use, share and exchange traditional natural resources; conduct burial rites; teach about the physical and spiritual attributes of the area; and maintain places of importance and areas of significance.

"The expression of all native title rights and interests are subject to the laws of the commonwealth, state and local governments."

An Indigenous Land Use Agreement will also be finalised this year, allowing the Quandamooka people the opportunity to help manage their traditional country.

Queensland Environment Minister Vicky Darling said the Quandamooka people would be permanently involved in the management of national parks on North Stradbroke and Peel islands.