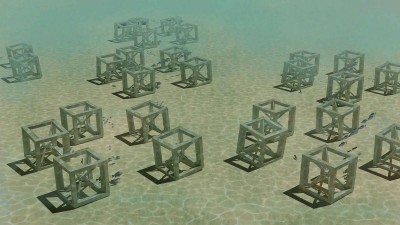 Scuba diving and recreational fishing in the Shoalhaven area will receive a major boost with NSW's second offshore artificial reef to be installed.

Anouncing plans to develop the artificial reef, NSW Primary Industries Minister Katrina Hodgkinson explained "the new southern offshore artificial reef will be located about 30 metres deep with easy access from the entrance to the Shoalhaven River.

"To determine the exact site, extensive consultation will be undertaken with recreational and commercial fishermen, Government agencies and other stakeholders.

"A detailed environmental assessment will be undertaken prior to deployment of the reef and its effectiveness will be monitored.

"In recent years the NSW Government has deployed five concrete artificial reefs in estuarine locations and one steel reef off Sydney's South Head, all of which have been highly successful and popular.

"The reef for Shoalhaven will differ in design from the large steel structure deployed off South Head instead consisting of clusters of giant concrete cubes up to four metres in height and weighing as much as 17 tonnes each.

"Depending on the dimensions of the final concrete reef design selected, between 20 and 40 concrete cubes will be used."

Image shows an artist's impression of the completed reef.