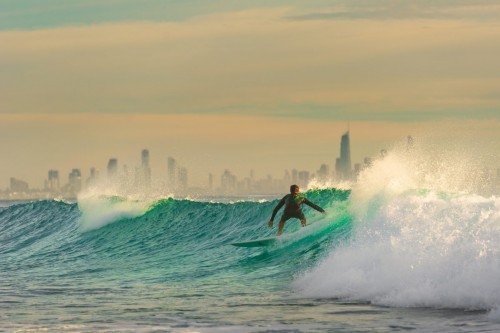 Neil Lazarow, a Senior Researcher with the Griffith Centre for Coastal Management, believes that building artificial reefs, potentially with an associated payment system, could help allay problems of overcrowding, and instances of âsurf rageâ at popular surf breaks at sites such as Snapper Rocks, Duranbah, Burleigh and Currumbin.

Lazarow has submitted a private report to Gold Coast City Council suggesting that the Council should build several artificial reefs, the first of which he believes should be site at Palm Beach, and another which could create a super surfing break.

Improved man-made surf could allow beaches to be graded, with poorer surfers able to access the less challenging breaks.

Narrowneck artificial reef was built just north of Surfers Paradise in 1999 by dumping geotextile bags that were filled with sand over an area as big as 30 Olympic-sized swimming pools.

Surfers Paradise-based City Councillor Susie Douglas said councillors had recently discussed creating a similar artificial reef at Palm Beach in the Coast's south. However, Councillor Douglas said a paid system was not on the agenda and she personally felt beaches should remain free.

Councillors acknowledged the need to spend on infrastructure, with a future plan to combine artificial reefs with sand replenishment by dredging the Broadwater, Councillor Douglas stating "the economic benefit (from surf tourism) is huge ... we need to fund these (artificial reefs)."

Surfing's economic contribution to the Gold Coast is worth at least $126 million a year.