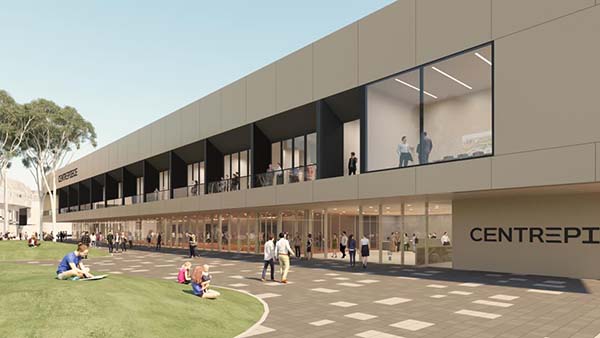 Melbourne and Olympic Parks has revealed the name of their new function and media centre – CENTREPIECE at Melbourne Park.

Positioned in the heart of the precinct and scheduled for completion in late 2021, the new venue’s architectural design pays homage to the native Australian landscape, while its food menu, curated by culinary leader Asif Mamun, Executive Chef of Delaware North, will showcase locally sourced seasonal produce, driven by a paddock to plate philosophy.

The team will also explore collaborations with local Victorian wineries, breweries and distilleries, set to elevate the catering experience even further and highlight the incredible produce that the state has to offer.

Lara Burnes, General Manager, Premier Events & Experiences noted “Melbourne and Olympic Parks is truly one of a kind, with nowhere else in the world offering a series of unique event spaces, all connected to the thriving heart of the city.

"CENTREPIECE at Melbourne Park will join our impressive line-up of venues, and be all-inviting for those looking for an unparalleled event experience.

“We’re looking forward to early 2022 to see our new venue become home to some of Melbourne’s most eventful and marvellous moments."

With the capability and flexibility to host both large-scale and smaller, intimate events, construction on the centre is under way, with the precinct’s surrounding grounds already levelled out, representing the third and final stage of its $972 million redevelopment.

Civic in design, the architecturally impressive concept is quintessentially Melbourne and will include 8.5 metre high ceilings and floor-to-ceiling windows, projecting natural light across a generous 2,000 metre2 pillarless ballroom and 800 metre2 pre-function area. Across two levels, the upper floor will feature a 250-seat auditorium, with 15 breakout rooms and outdoor terraces with uninterrupted views of the Melbourne city skyline.

Leading the design, NH Architecture + Snøhetta Director, Hamish Lyon, commented "the design of CENTREPIECE at Melbourne Park plays on the strengths of its location - the heart of the precinct’s parklands nestled next to the Royal Botanic Gardens and Yarra River, its proximity to the city, and the site’s proud sporting and entertainment history. It is distinctively Melbourne, intrinsically linked – physically, culturally and emotionally.”

For more information on CENTREPIECE at Melbourne Park go to centrepiecemelbourne.com.au - a new website to launched today.