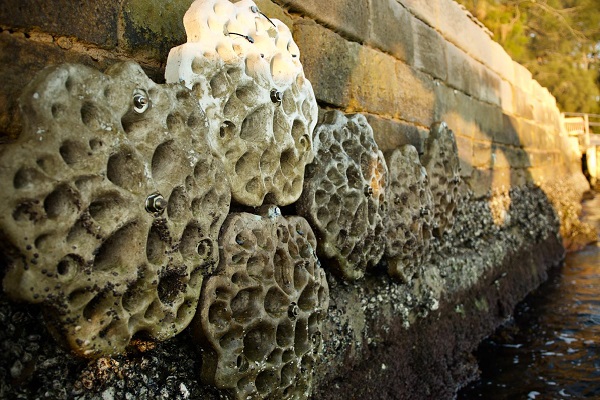 Installed at the city's Rushcutters Bay, the latest ‘living seawall’ of 90 habitat panels runs along two 12-metre stretches of the foreshore, providing local marine life with nooks and crevices to live in and encouraging more seaweed and animal species to return.

The panels were installed by the Sydney Institute of Marine Science (SIMS), with support from the City of Sydney, following the success of projects in other locations across Sydney Harbour.

Co-leader of the SIMS Living Seawalls project, Associate Professor Melanie Bishop, said the aim was to bring back marine life to the manmade seawalls that make up half of Sydney Harbour’s shoreline, increase biodiversity and improve water quality.

Associate Professor Bishop advised "more than 50% of the Sydney Harbour shoreline is made up of seawalls and research shows these seawalls do not support biodiversity in the same way as natural shorelines.

“We're increasing biodiversity by bringing back missing microhabitats such as rock pools and crevices. These will provide more space for barnacles and seaweeds to live, while small fish, snails and crabs will be able to hide inside the holes and crevices.”

City of Sydney Lord Mayor Clover Moore said the City was proud to support the program with a $20,000 grant in 2019, advising “Sydney boasts the world’s most beautiful harbour, home to an array of marine life that need our ongoing support and protection.

“The living seawall panels installed at Rushcutters Bay will enhance the local marine ecosystem and protect our harbour from manmade environmental challenges.

“Innovative projects like this will become even more important as we deal with the impacts of climate change and sea level rise. As coastal areas face inundation and flooding, we will undoubtedly see an increase in seawalls being constructed. This living seawalls program shows we can find solutions to protect and enhance biodiversity in areas undergoing rapid change.” 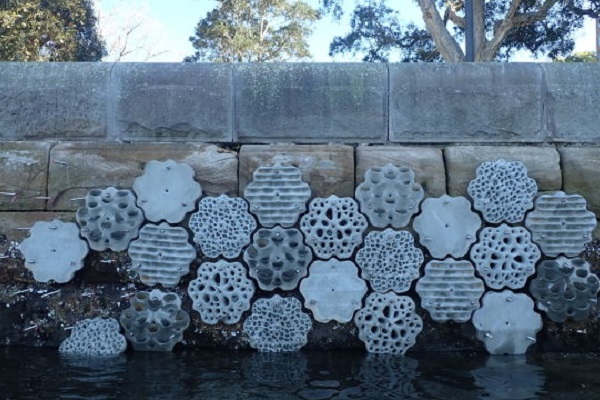 Dr Vozzo added "we anticipate that the habitat panels at Rushcutters Bay will encourage growth of a variety of marine species, including oysters and mussels that help improve water quality, seaweeds that provide food for marine life and help sequester carbon, and snails, limpets, crabs and chitons.

Associate Professor Bishop said living seawalls at Milsons Point and McMahons Point, which have been in place for 18 months, have proven to be a success – a promising sign for what’s to come at Rushcutters Bay.

She went on to say "these living seawalls have enhanced biodiversity, bringing species back to the shoreline.

“The numbers and types of species found on the panels is greater than in nearby manmade shorelines – and they match the numbers found along natural shorelines. It’s also provided a welcome boost for recreational fishing.

“The program has also shown that the moist and shaded microhabitats of the panels can reduce temperatures by as much as 10 degrees, which may enable species to persist in a warming climate.”

The project has attracted local and international attention, with SIMS receiving orders for the panels from councils in Sydney and from governments and organisations overseas.

The institute worked with design studio Reef Design Lab to develop and produce the panels from a 3Dprinted mould.

Images courtesy of Sydney Institute of Marine Science/City of Sydney.

26th May 2020 - Victoria’s coastline to be protected against erosion