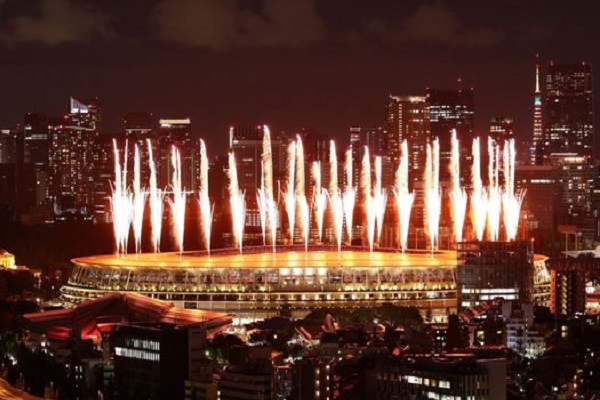 Delayed by a year, the Tokyo Olympics have begun with a subdued Opening Ceremony capped by Japanese tennis star Naomi Osaka lighting the Games cauldron.

Last night’s official opening of Tokyo 2020 was very much a reminder that this is a Games taking place in a world facing the ongoing challenges of the Coronavirus pandemic.

Nonetheless, speaking at the opening, International Olympic Committee (IOC) President, Thomas Bach stated “today is a moment of hope”, adding “yes, it is very different from what all of us had imagined. But let us cherish this moment because finally we are all here together."

Preceeded by a display of fireworks, the ceremony itself was modest, with no crowds at the Japan National Stadium and the majority of teams represented by small delegations of masked athletes waving to empty stands.

At the heart of the stadium stood the Olympic cauldron, a representation of the sun atop Mount Fuji. It later opened like a flower, embodying "vitality and hope".

Earlier, the Japanese flag had entered carried by athletes and healthcare workers.

The ceremony also paid tribute to the universality of sport, its power to unite those of different cultures and backgrounds and provide a sense of hope, even in the most troubling of times.

Significantly, the victims of the terror attack at the 1972 Munich Olympics were remembered during the opening ceremony, the first time in nearly half a century.

A moment's silence commemorated the 11 Israeli athletes killed by Palestinian gunmen during the Games.

Tokyo 2020 President, Seiko Hashimoto went on to say “here is a vision for the future, one that embodies 'unity in diversity', one of peace and respect for one another.

"This is the power of sport, and an expression of the fundamental values of the Olympic movement. This is its essence."