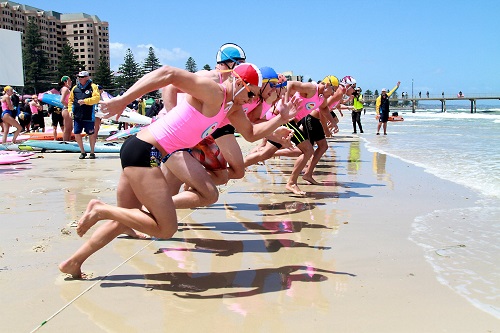 The Gold Coast will host lifesaving’s most prestigious event for the first time in 35 years – this week securing the rights to the 2024 Lifesaving World Championships.

Queensland Tourism Industry Development Minister Kate Jones said the event would bring more than 5000 competitors from 50 countries to the Gold Coast over 17 days of competition.

“The lifesaving movement is part of the very fabric of the Gold Coast community, from Nippers right through to the elite ironmen and women, so it’s great to be able to secure this event for a city where it means so much.

“Tourism and Events Queensland, together with City of Gold Coast and Surf Lifesaving Queensland, have delivered another high-profile international event that will showcase this region to the world.”

Queensland Assistant Tourism Industry Development Minister and Member for Gaven Meaghan Scanlon said the competition would be held at Kurrawa Beach and the Gold Coast Aquatic Centre over 17 days of action in late August and early September 2024, adding "we know this event will deliver for the Gold Coast economy. With more than 12,000 spectators we expect the world champs to generate more than $15 million for the city.

“When it comes to major events, we’ve got the runs on the board. In the last three years we’ve more than doubled the value of Queensland’s major events calendar – this year worth $780 million.”

Fife added “Queensland is home to some of the world’s top beaches, many of them on the Gold Coast, and I can’t think of a better location to showcase our sport to the world.

“Some of lifesaving’s biggest names came up through the sport right here on the Gold Coast, and these championships will provide a new generation of athletes with the opportunity to make their own mark on the global stage.

Ford concluded “there were a number of factors considered when making the decision; firstly Queensland’s success after the Commonwealth Games, the fact they can deliver large events on the Gold Coast, the Australian Championships is run there regularly, and the fact there’s infrastructure in place and a world-class swimming facility at Southport.

“Queensland has so many amazing tourist spots to go to, and I think you’ll find the majority of athletes will be staying and spending time in Queensland.”

The Championships are expected to attract more than 5,000 competitors from approximately 50 countries along with more than 12,000 spectators and supporters are also anticipated to converge on the Gold Coast across the duration of the event.

Image: Action from the 2018 Lifesaving World Championship currently being staged in Adelaide.