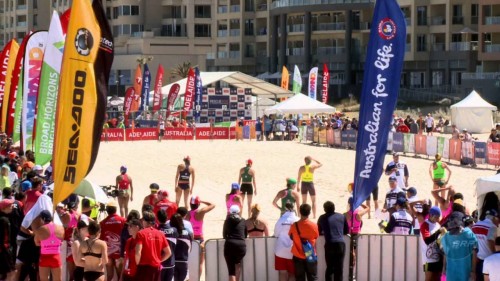 The Lifesaving World Championship in Adelaide later this month is set to be a massive success with the event attracting more than 4400 entries.

The 16 days of competition starting on 16th November will be held on the beach at Glenelg and at SA Aquatic and Leisure Centre and will involve 44 countries and 806 teams.

This is the second time South Australia has hosted the titles, having held a successful competition in 2012.

Looking forward to the event, Surf Life Saving SA Chief Executive Clare Harris stated “Adelaide first hosted the world championships in 2012 and we could not be prouder to host the 2018 titles.

“This means a lot for our state and for our surf lifesaving community.

“This event is a fantastic way to shine the spotlight on our city and showcase our beaches. The competition to be called the world’s best is fierce and it is going to be a highly entertaining 16 days.

“Competitive lifesaving is impressive and exciting to watch.”

Image shows action from the 2012 Championships.