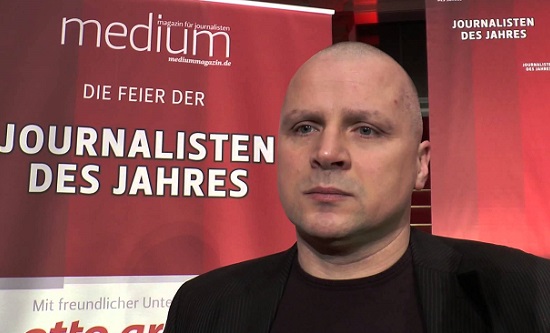 One of the world’s leading sports investigative journalists will be the headline guest at the inaugural Football Writers’ Festival to be held in March next year.

German journalist and author, Jens Weinreich, specialises in the international politics of sport, international organised crime in sport and the bidding processes for mega-events including the Olympics and FIFA World Cup.

Weinreich is one of many journalists, writers and authors who will take part in the Festival, being  held at the Jamberoo Pub, Jamberoo in NSW on 23rd and 24th March next year.

A joint venture between the Johnny Warren Football Foundation and Fair Play Publishing, the Festival aims to celebrate football, writing and ideas with discussion and debate on the big issues in football, to meet and talk with football players, and to hear from authors of recently published books such as the seminal Encyclopedia of Socceroos by Andrew Howe, published earlier this year.

Weinreich (pictured) has twice been named ‘Sports Journalist of the Year’ in Germany in the past decade, and has covered almost three dozen of the world’s biggest international sporting events including the FIFA World Cup, the Olympic Games and world championships in athletics and swimming.

He has received major awards in Germany and internationally for his investigative journalism. Along with British journalist and author, Andrew Jennings, and Australian whistleblower and writer, Bonita Mersiades, Weinreich has been one of the most “despised, criticised and excluded” journalists in the football world - until the May 2015 arrests at Zurich proved the three of them right.

His most recent prize was in 2016 for the investigation, with other journalists, into how Germany became the host of the 2006 FIFA World Cup, resulting in ongoing tax and criminal investigations.

Weinreich has written seven books on the Olympic movement and world football and has been involved in numerous television documentaries into sports corruption. He is currently a freelance journalist working principally for public broadcaster ZDF and Der Spiegel newspaper.

Weinreich will attend the Festival with the support of the Johnny Warren Football Foundation.

In addition to Weinreich and Howe, other confirmed speakers include former ABC journalist and author, Trevor Thompson, and Western Sydney University associate professor Jorge Knijnik. Other speakers and presenters will be announced over coming months.

The Football Writers' Festival will be held over the weekend of 23rd and 24th March 2019, and will include workshops, keynote speeches, debates and question and answer sessions, as well as downtime activities such as a football match and dinner and trivia.