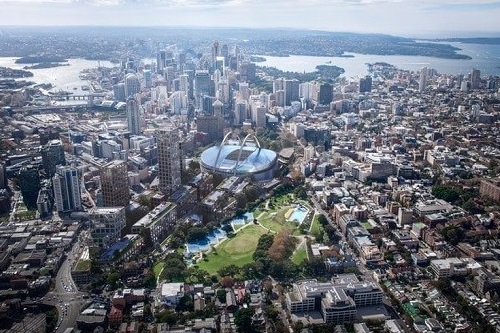 Architecture firm Bates Smart have unveiled designs for a 45,000-seat stadium to be built in the space above rail yards and platforms at Sydney’s Central Station.

NSW Government as an alternative to their current proposal to demolish and rebuild the current Allianz Stadium at Moore Park in Sydney’s Eastern Suburbs.

Echoing the global move towards centrally located stadiums, the Bates Smart proposal has the benefit of being served directly by key Sydney rail lines and buses as well as the cities expaning light light rail system.

Envisaging the eventual return of the site of the Allianz Stadium to parkland, the CBD stadium plan would also see fans able to make the most of entertainment, restaurants and bars around the proposed central location.

Introducing the concept, Bates Smart Director Philip Vivian says the design would involve building a podium over the station to create a site for the proposed stadium, telling The Guardian that the new venue “would create a piece of the city that heals a big scar in its fabric”.

He added “a stadium should not be an isolated element on the edge of a city or in a park.

“What people want to do is extend their experience and go out for a meal or to a bar afterwards. At Allianz they spill out into nowhere.

“The NSW government often pays to get major events to Sydney but there’s nothing for tourists to spend their money on when they attend an event at Moore Park.”

Reports suggest that the NSW Government has only given a muted response to the idea, saying any unsolicited proposal needed “to be evaluated under the appropriate guidelines”.

A design competition for the $729 million rebuild of Allianz Stadium is underway with the winner to be announced next month.

The NSW Government plans to begin the project before the state election in March next year.

Bates Smart is an architectural firm with studios in Melbourne and Sydney, Australia. Founded in 1853 by Joseph Reed it is known as one of Australia's oldest architectural firms, and has been responsible for numerous landmark buildings.

Image: New concept for inner city stadium to be built over Central Station